The criteria for Covid-19 testing has changed again and doctors are being urged to swab high-risk patients who are more likely to get critically ill from Covid-19. 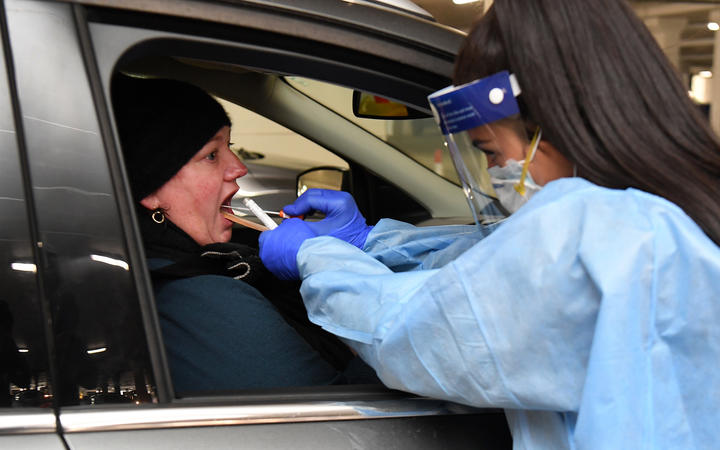 Covid-19 testing in Melbourne. People in New Zealand can now have the option of a throat swab, rather than the more uncomfortable nasal one. Photo: AFP

People getting tested can also now ask for a throat swab, rather than the more uncomfortable nasal one.

Doctors are being told to test older, Māori and Pasifika patients with any respiratory illnesses, because they are most at risk from the coronavirus.

As well as the funding issue, Murton said the level of concern in the community about having Covid had lessened.

"People have become a little bit more relaxed about it because we don't have much of Covid in the community at all and we've had days, weeks, that we haven't had any cases.

"And then the numbers of cases we have had in the past few days have been people who have travelled from overseas or been in contact with someone.

"But as we've seen in Melbourne and Sydney, you can't be complacent."

Testing was important to catch anyone who was infected but asymptomatic, so doctors needed to be able to test anyone whose symptoms seemed unusual. "By the time it pops up there's multiple people who've got it."

The level of community testing has dropped sharply and the government is worried not enough is being done to keep preventing community transmission.

Health Minister Chris Hipkins has reiterated the government wants to see testing numbers come back up. There was no room for complacency, he said yesterday, even though a surge in testing about two weeks ago gave confidence that if there had been any Covid-19 out there, some evidence would have been seen.

"We want to ensure we're providing good robust testing for anybody who is in that higher risk category but then we also want to make sure that we're maintaining a good sound base level of testing in the community to be sure that if there's any Covid-19 out there, that we're picking it up."

Royal College of GPs medical director Bryan Betty said the guideline changes cleared up some of the uncertainty on who should be offered a test.

"In terms of surveillance, that is people who haven't just come through the border or are in quarantine, just the general population, it is a lot more prescriptive.

"It will add a sense of clarity on who should be offered a test, in practice."

Whether the move would increase the number of people who agreed to have a test depended on how the Ministry of Health and government presented information to the public, he said.

"I ran a respiratory clinic yesterday afternoon and every patient I offered a Covid test to didn't see the need for the test and refused," he said.

Though that was an understandable reaction, the bigger picture was that testing levels needed to be kept up and carried out in the right places in the country.

He said many patients would prefer the option of a throat swab available offered under the new guidance.

Murton said anyone with symptoms should ring Healthline or their GP to find out whether to come in to have a test.