The number of tandem skydivers dislocating their shoulders is on the rise, an aviation safety report has found. 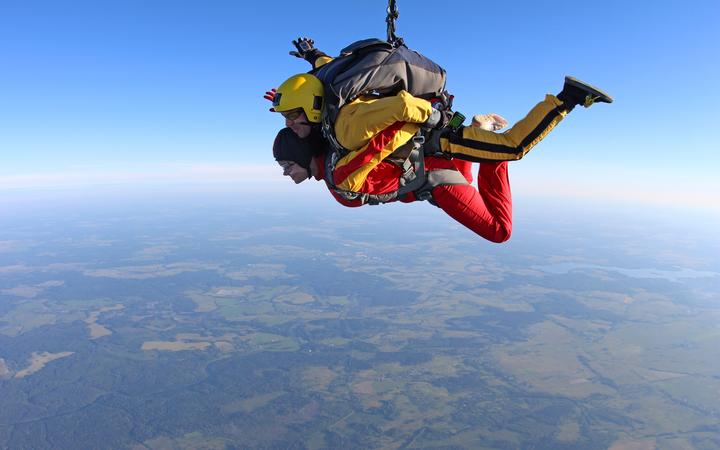 There were nine tandem skydiving accidents in the first three months of this year. Photo: 123rf

The Civil Aviation Authority's safety summary for the first quarter of this year showed five of the nine tandem skydiving accidents in the first three months of this year were dislocated shoulders.

CAA safety intelligence unit manager Jack Stanton said parachuting could reveal shoulder problems people might not be aware they have.

"Parachuting puts unusual stresses on your body that you don't see in your normal day-to-day life, so there are things that can occur suddenly while parachuting you might not have even been aware you were prone to."

"They have to do their own incident investigation and what they found was that people knew they had a previous injury to their shoulder but were reluctant to declare it because they thought it would prevent them from jumping."

He said changes to the wording on the passenger declaration form were aimed at encouraging people to disclose medical conditions.

"It needed to be made clear to people that disclosing a medical condition won't prevent them from jumping, but it will allow the tandem master to modify the way he (or she) runs the jump so you don't land on your gammy knee or they don't expose your bad shoulder to the airflow."

The January to March 2020 safety report also showed the overall number of aviation accidents was lower than at the same time last year.

There were 28 accidents in the private and recreational sector over the same time last year.

Stanton said the reduction in accidents this year was unlikely to be because of Covid-19 restrictions. The report covered the period from the 1 January to 31 March which covered only one week of lockdown.

He said the reason for the drop was hard to answer because accident investigations focused primarily on causes, rather than what was not a cause.

"The private and recreation area is complex because that's everything from hang gliders to parachutes to small, home-built aircraft - much like recreational boating which has a variety of craft from kayaks to yachts and you have to be careful around saying what the cause was.

"One thing we are seeing a general reduction in recreational flying activity, due to things like rising costs, but the number of accidents have come down faster than the actual activity has reduced."

Stanton said the calmer weather than normal over that timeframe was something they might look into.

"In the past we've found a good percentage of private and recreational accidents are caused by encountering unexpected bad weather, such as flying into rain or cloud so the weather over this time is likely to have a strong co-relation."

Stanton said the aim of the safety reports supported one of CAA's central mission to promote and ensure the safe conduct of air operations.