By Johanna Reidy* for The Conversation

Māori have demonstrably poorer health outcomes than other New Zealanders and this disparity has persisted for decades.

A recently released and long-awaited major review of New Zealand's health and disability sector points to systemic racism, lack of responsiveness to Māori needs and insufficient integration between services as reasons for unequal health outcomes.

It recommends a new Māori health agency to tackle ethnic inequalities and argues that without a fundamental culture change and deliberate steps to address racism, healthcare would not be in a good state for future generations.

But the review panel was split on whether the new Māori agency should provide advice only or be directly involved in decisions about resource allocation.

This is an uncomfortable exercise, and we should not underestimate the system's tendency towards the status quo. If the government is serious about reducing inequity in health, it would do well to heed advice that Māori have to be involved at all levels of decision making.

The proposal for a Māori health agency addresses a fundamental and unresolved question about meaningful co-governance between Māori and the Crown.

An earlier major shake-up of the health system in the early 2000s tried to address inequality in health outcomes between Māori and non-Māori, but the gap remains stark. Māori fare worse than the general population on most health and social indicators, which shows they struggle to access healthcare - and even if they do, the health system can be unresponsive to their needs.

Māori are more likely to suffer or die from heart disease, diabetes, lung cancer and several other conditions. 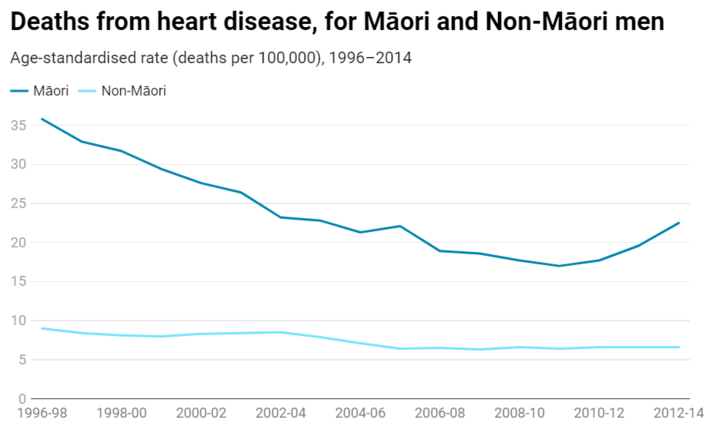 This latest review includes some features that could make inroads by building levers for change into the system: a charter, better planning and adjustments to funding. These features also address financial and health service sustainability and stewardship of the whole system.

The review proposes a charter with a set of shared values, including upholding equity, a focus on well-being, a commitment to the Treaty of Waitangi and an a collaborative approach. Every organisation and person in the health system would have to subscribe to this and the system would hold itself to account against these values.

The charter would make sure everyone is pulling in the same direction as the system transforms itself. A focus on equity would facilitate culture change and help build capacity - both among Māori themselves and of the system to become more responsive to Māori needs.

The review also recognises that longer planning timeframes are necessary, beyond an election cycle, to show health improvements and embed culture and system change.

It recommends an adjustment of the current population-based funding formula to provide funding to district health boards according to the socio-economic and ethnic profile of the geographic area they serve.

The last reforms of the early 2000s have taught us that unless Māori have a voice, their input will be limited and marginal, and once again, Māori health won't improve.

There are several Māori health providers contracted to district health boards throughout the country, but the funding for these services is small compared with the overall health spend. These services also tend to be overburdened with compliance and fragmented.

Such services cannot meet the needs of all Māori, and "mainstream" services must improve. For real change, Māori cannot simply advise but need to have meaningful governance or co-governance, across all processes of designing, planning, purchasing and monitoring services.

This is where the adage "whoever has the gold makes the rules" rings true.

The health system review made two sets of recommendations. Some of the review panel members recommended the proposed Māori health agency should note Māori views, but with few practical levers to transform them into action.

Dissenting panel members and experts from a Māori advisory group have written their own alternative plan. They argue that without requiring active Māori involvement at all levels of commissioning health services and using every system lever available to improve Māori health, we will simply end up repeating the mistakes of the past.

This reform is about fundamentals. The proposed charter, the focus on culture change and clear values are not simply warm fuzzies. They are vital.

Equity can only be achieved through accessible services, and only if the entire system is behind this. The fact the review panel was split in its recommendations but chose to include both views shows the importance of power sharing.

*Johanna Reidy is a Lecturer at the Department of Public Health, Wellington School of Medicine.