A ship carrying a controversial fertiliser product has had a frosty reception from protesters in the Canterbury port town of Lyttelton this afternoon. 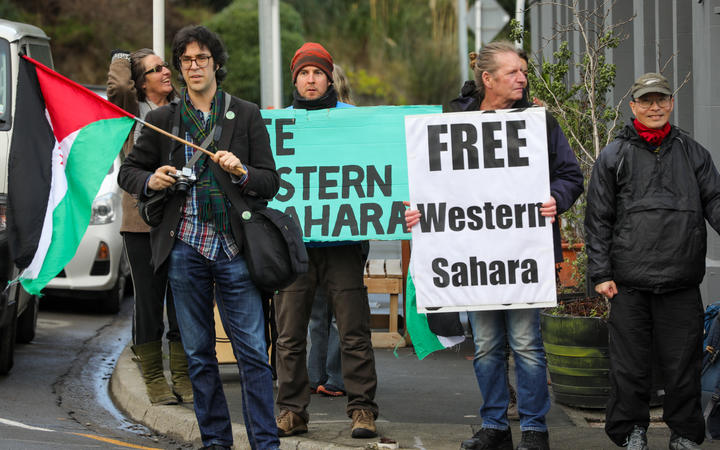 About 20 people marched from the port to the main street to protest the arrival of more "blood phosphate" for fertiliser company Ravensdown.

The product on the Trans Spring ship comes from Western Sahara, which Morocco is accused of illegally occupying.

While Ravensdown maintained the trade was legal and said it had done due diligence with the supplier to operate within UN expectations, Rail and Maritime Union representatives delivered a protest letter to the ship's captain asking for the import to be halted.

Protester Josie Butler said Ravensdown was one of just two companies in the country, and three worldwide, still importing from Western Sahara.

"This is a campaign that we can really win in New Zealand so we just want to keep the pressure on the companies, tell them that it's not okay, it's not the international image we want to be portrayed of New Zealand," she said.

A Ravensdown spokesperson said with Covid-19 disruption continuing around the world, the "supply risk" of the nutrient was very real.

"Losing access to rock from a country with 70 percent of the world's reserves would cripple the agriculture sector's ability to contribute to the Covid-19 recovery here in New Zealand," they said.

Butler said there were other viable options to replace the phosphate.

"They're just putting profit before people. It will take a small amount to transition and then we don't have to worry about it anymore. So we're hopeful if we keep the pressure on then they'll decide to do the right thing," she said.

People from the Ravensdown Take Em Down group also blocked entrances to the Ravensdown fertiliser plant in Dunedin yesterday, and held small protests in September when another ship was delivering the same product.