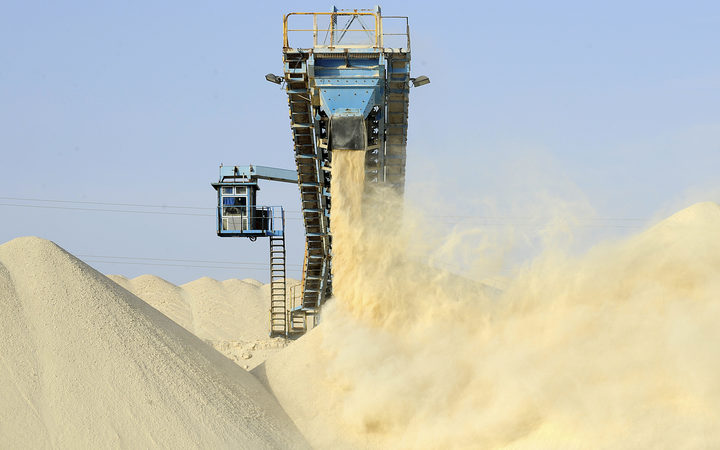 But the companies say their imports have not changed.

Kamal Fadel is the Australia and New Zealand representative for Polisario, the United Nations-recognised independence movement for Western Sahara, which is currently occupied by Morocco.

Western Sahara is a piece of desert land of a similar size to New Zealand. It was a Spanish colony but was taken over by Morocco in 1975, a move condemned by the UN.

Mr Fadel is in New Zealand to spread awareness of the issues in Western Sahara and the impact New Zealand's phosphate imports were having on the region.

"We're not just looking. We're seriously considering and talking to lawyers. We are very close to going to a court with a strong case.

"We are very confident of our case... We have been successful in Europe in the European Court of Justice, in the UK in the High Court, in South Africa, there is no reason that we won't be successful here."

"We have talked nicely ... it's been over 20 years of involvement of these companies so enough is enough."

Western Sahara has successfully won in international courts, with those courts ruling Morocco had no legal claim to the phosphate, so could not sell it.

"At the moment New Zealand companies are part of the problem, not the solution, because their involvement provides money to the Moroccans to buy arms and tools to oppress our people. It gives them moral support that they have a right to be in Western Sahara which they don't have.

"It's a de facto recognition of Morocco's involvement."

The Santa Alexandra, currently anchored just outside the Port of Tauranga, holds the latest shipment of phosphate - just over 60,000 tonnes worth.

Ravensdown and Ballance Agri-Nutrients are the only two importers of phosphate in the western world and Mr Fadel said it appeared they may be stockpiling it.

"We have noticed this year there are more vessels coming to New Zealand than usual, with huge amounts of phosphates - around 60,000 tonnes each, and that is an indication of the stockpiling process because they are worried we are close to a legal case and they want to have reserve here, before they find an alternative."

However a spokesperson for Ravensdown said it had not bought in more phosphate this year.

"We typically import three ships a year of rock from the area and this has not changed."

Ballance chief executive Mark Wynne said it was the same for them.

"Our imports are very consistent. We bring in roughly three to four vessels per year and have been at that level for the last five years."

He said it was comfortable with the trade it was doing.

"Legally we're very comfortable and ethically - I visit the region reasonably regularly to see first hand that the social responsibility programmes that the Moroccans say they're doing are actually taking place on the ground - and I have to say they're very impressive."

He said the company would defend any court action that came its way, and the overseas cases did not set a concerning precedent.

"We have clearly had lots of legal advice and we're very comfortable in our decision."

Officials at the Ministry of Foreign Affairs and Trade met with Mr Fadel and said the government remained of the view that New Zealand companies should be looking for alternatives to phosphate.

A spokesperson said companies importing from Western Sahara did so at their own risk.

"With the support of the international community and the United Nations Mission for the Referendum in Western Sahara, we want to see parties make progress towards negotiating in good faith a mutually acceptable political solution that will resolve the dispute over the status of Western Sahara."

At the Council of Trade Unions biennial conference yesterday, a motion was passed to urge the government to halt the import of phosphates from occupied areas of Western Sahara until the legal status of the territory was determined.

Mr Fadel was pleased with the motion and said the longer New Zealand kept buying phosphate, the more damaging it would be for its reputation.

"Australia's stopped ... why can't New Zealand do the same thing."

"It is the only remaining western country involved in this dirty business."