Two new cases of Covid-19 have been identified at managed isolation facilities today, and new measures for flight attendants are being brought in, Dr Ashley Bloomfield says.

Dr Bloomfield provided the update at his usual 1pm briefing.

The first new case was a man in his 20s who flew into the country from India. The second was also a man in his 20s travelling from Los Angeles who tested positive at Jet Park Hotel, which he had been at since arriving in the country after experiencing respiratory symptoms.

"Sometimes the Jet Park facility is used for managed isolation if the other facilities are full ... but all I'm told is there was a mix-up in the airport at the queues and they ended up at Jet Park, that's where they would've been transferred upon diagnosis anyway," Dr Bloomfield said.

He said a case in Wellington was now considered recovered, so the total number of active cases in the country is 10.

Confirmed cases were at 1165. The Auckland St Margaret's cluster is still open.

Yesterday there were two new Covid-19 cases in managed isolation facilities - one at Novotel Auckland Airport and one at the Grand Millennium, also in Auckland.

Since then the government has extended a ban on cruise ships and updated its health order to clarify that travellers must take a test, possibly several, before leaving isolation.

Additional testing and monitoring of flight attendants was also being considered, he said, particularly for those travelling from the west coast of the United States, because of the arrangements there.

"We've worked with Air New Zealand to introduce that all those crews have to stand down for 48 hours and be tested and return negative test. We've been talking actively with them over the last 48 hours about Australia, because what's clear is that people are coming from high-risk areas and converging in Australia in transit and then coming across, and we've had several cases now on those flights."

"We're looking at what else we may need to add in active discussion and expecting to confirm some further arrangements with them. One which is already getting under way is provision of masks to all passengers on those flights."

The intention was that masks would be handed out to all passengers on the flight and they would be shown how to wear them, he said. Some may not be able to due to medical reasons, but it was hoped people would understand that was part of the protocol.

He said another measure could be to ensure those crews were solely on international routes, not domestic routes.

Prime Minister Jacinda Ardern said the recent rise in the number of Covid-19 cases among new arrivals in the country probably reflects what had been happening overseas.

Before last week, more than five weeks went by with no cases at all.

After a woman who'd arrived from France tested positive on 10 May, no case of the coronavirus being brought into the country was reported until 16 June.

That was when it was revealed two women who had arrived from Britain tested positive after being allowed to leave managed isolation early.

Ardern said the re-emergence of cases over the past seven days likely reflected global changes.

"The pandemic is accelerating overseas and we have people coming back from countries, like India, Pakistan and we've seen the UK and today the western broder of the US, where they do have a lot of this infection out there."

Since 9 June, testing in managed isolation facilities has been rolled out, there's been suggestions that people should be tested at the borders. Dr Bloomfield said the tests performed at day three and day 12 were more effective at identifying cases than that would be.

"The reason why we don't test at arrival, and we wait until day three of isolation is because that is about day five of people's journey ... and we know testing then is more likely to pick up infection than earlier testing from when people may be incubating the virus but not test positive," he said.

Testing at day 12 provided extra security because tests have a false negative rate of 20-30 percent and ensured no infection ahead of people's departure from the facility, he said. 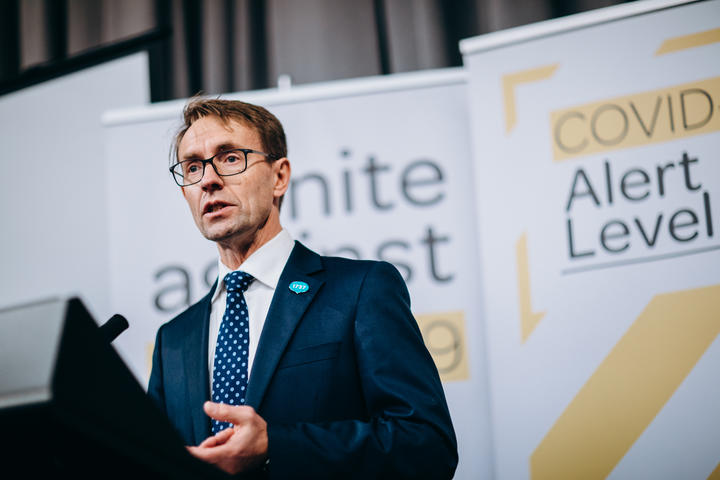 Dr Bloomfield said the final person who had been granted a compassionate exemption to leave isolation who had not been followed up yesterday had since been contacted, and testing had been arranged.

He said another five people who had contact with the Novotel Ellerslie - where two women who were granted compassionate exemptions had been - had been contacted, leaving just six of the 190 contacts outstanding.

He confirmed a contact of the two women - sisters, who had travelled to Wellington upon the death of their parent - had visited them to drop off food during their isolation but said this was done at a distance. This person was followed up and tested and it was negative.

Dr Bloomfield said they did not really break the rules because physical distancing was practiced.

Dr Bloomfield said the ministry was still following up with 2159 people who had left managed isolation between 9 and 16 June, and urged anyone in that category - which included people who had exemptions and those at the Novotel - to contact the dedicated health number (09 302 0408).

Cabinet is also considering a co-payment scheme for isolation facilities, while capacity is also being increased to meet demand.

Minister in charge of isolation and quarantine facilities, Megan Woods, today told Morning Report the government was looking at a range of options to manage the flow of travellers. She ruled out stopping flights from Covid-19 hotspots or implementing a ballot system.

Dr Bloomfield said he still did not have information on how many of the 2159 people had been tested.

"This is because the testing was done and no NHI (National Health Index number) was necessary on the information that the hotel has got, so we're busy matching the testing in the lab database and the names and dates of the birth of the people."

All those people would have completed their 14-day isolation, undergone health screening, and been offered testing upon departure, he said, and posed a "very low risk to people in the community".

"New Zealand is one of a very small number of countries that not only includes 14 day mandatory isolation, but also the double testing before people are allowed to go out in the community," Dr Bloomfield said.

"Ninety-nine percent of people if they are going to be showing the infection would have done that by day 11 or 12, so there's room built into that [14-day period]."

He said that was in line with international evidence about isolation.

"Once people have completed 14 days, they pose very little risk to the community, even if they might have virus detectable it doesn't mean they are infectious."

He said rates of testing around New Zealand had increased again, partly due to the high level of awareness in recent days because of new cases emerging.

There would also be surveillance testing of people working at the border and facilities, he said.

He said Crown research institute ESR had performed testing of sewage samples from when there were cases of the coronavirus in the community and had been able to detect the virus in those samples even when there were low numbers of infections.

"They have now the technology to be able to use that as part of ongoing surveillance, and that is part our surveillance plan from here," he said.

He was not certain whether it was currently in use.

He asked for any further information about a homeless person who was said to have spent time in a managed isolation facility. He said so far the information had not been verified and "very well may be an urban myth".