Sir Peter Jackson has paid tribute to actor Sir Ian Holm, who played Bilbo Baggins in The Lord of the Rings films describing him as a delightful, generous man. 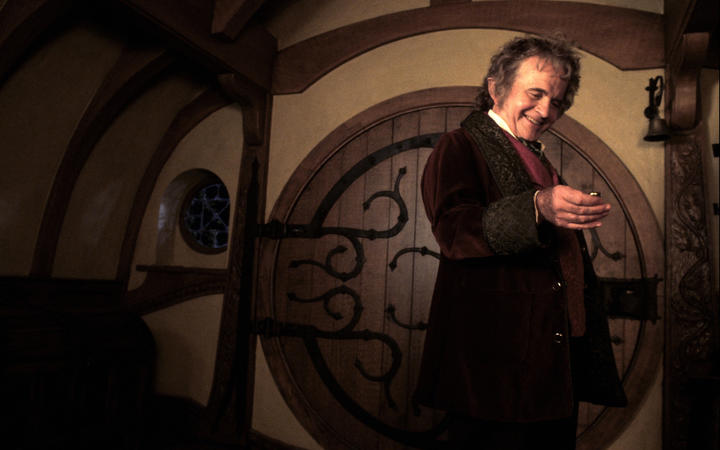 Sir Ian, who was a film and stage actor, died this morning aged 88.

In a posting on Facebook, Sir Peter said that back in early 2000, he was nervous about working with such an esteemed actor.

"Standing in Bag End on the first day, before cameras started rolling, he took me to one side and said that he would be trying different things in every take, but I shouldn't be alarmed. If, after five or six takes, he hadn't given me what I needed, then by all means I should give him specific direction."

Sir Peter went on to say that is what happened but that Sir Ian's performances were "all quite wonderful" and that "he rarely needed direction".

Sir Ian managed to keep a group of young child actors entertained and in one place with his story-telling skills.

"Young kids get bored very quickly, and Ian and I quickly realised that they couldn't hear the same story over and over again, as we captured the various angles we needed," Sir Peter said.

Sir Peter suggested that Sir Ian vary the story slightly each time that he told it so the children would stay engaged - and in one place between the takes.

The sequence was finally complete a couple of hours later.

"As the kids were ushered off set, and the crew moved onto the next sequence, Ian said that he'd never worked so hard in his life!" Sir Peter said.

Sir Peter Jackson said it was "incredibly brave" of Sir Ian to agree to play Bilbo Baggins again at a time when he was suffering from Parkinson's disease. Photo: RNZ / Alexander Robertson

Sir Peter said more than a decade later, at a dinner in London he asked Sir Ian to play Bilbo again for the opening scenes of The Hobbit.

Sir Ian said that he was very sorry, but he couldn't do it as he had been diagnosed with Parkinson's disease and could no longer remember his lines and certainly could not travel to New Zealand.

However, Sir Peter said they then tried "to figure out a process that would allow Ian to play Bilbo one last time", eventually suggesting that Sir Ian's scenes could be shot in London.

"By the end of the dinner he nodded slowly, and said, 'Yes, I think I could do that'. But I knew he was only doing it as a favour to me, and I held his hands and thanked him with tears in my eyes," Sir Peter said.

"It was incredibly brave of him to do that, and very emotional for those who witnessed it."