The first weekend at alert level 1 drew massive crowds of rugby fans to matches in Auckland and Dunedin - but hospital emergency departments across the country also felt the impact of the return to normality. 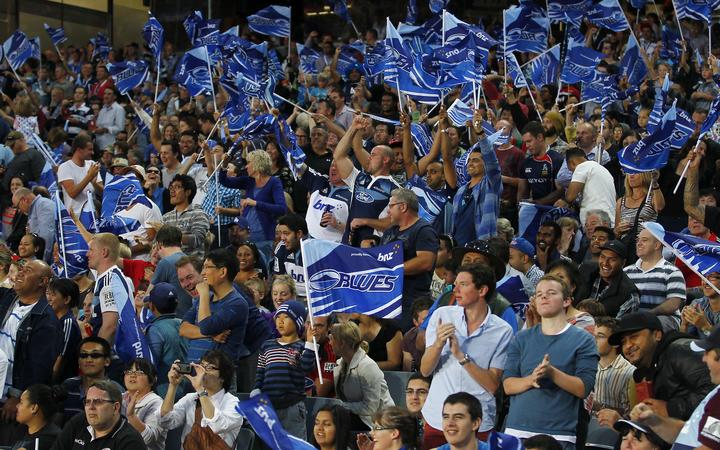 The crowd at Eden Park on Sunday afternoon. Photo: Photosport

In Auckland on Sunday afternoon, the Blues played in front of their largest crowd in 15 years - a full house of 43,000 fans at Eden Park - and they didn't disappoint, beating the Hurricanes by 10 points.

While in Dunedin on Saturday night, the game between the Highlanders and the Chiefs was much closer with Bryn Gatland landing a stunning drop goal with minutes left on the clock to give the Highlanders the win by one.

Dunedin and Auckland's mayors Aaron Hawkins and Phil Goff were among the thousands in the stands this weekend.

Goff said that besides being a great game of rugby, the march was a celebration of the return of normality.

"The fact that this match was broadcast around Australia and other places was a huge chance to showcase to the world New Zealand's success in dealing with Covid-19," he said.

Hawkins said it was great to have "the zoo back in action" on Saturday night and to take part in the march from the Octagon to Forsyth-Barr Stadium.

"It was a great atmosphere before and after the game, it has huge implications for our local hospitality sector, being able to gather in numbers at events like big rugby games," he said.

After the Blues match, Goff said the cafes, bars and restaurants in the area appeared to be doing great trade.

"Things were thriving there and people pick up that atmosphere of confidence and I think that that will spread around the city and around the country," he said.

However, the first weekend of alert level 1 also brought an increase in admissions to hospital emergency departments.

Stabbings, assaults and car crashes were just some of the reasons for patients flocking back in, according to Waikato Hospital's Dr John Bonning, who is also the president of the Australasian College of Emergency Medicine.

He said that expected arrivals had dropped by 50 to 60 percent in some hospitals, but reports from around the country indicated that this had risen to 85 to 95 percent of what was expected at this time of year.

"Mental health presentations have gone up proportionally across the country, but in general we're getting unfortunately a return to some of the trauma and alcohol-fuelled violence that we've been used to over the years," he said.

However, paediatric presentations remained lower than usual, despite the end of lockdown restrictions.

"They usually go significantly higher in winter and they're down 30 to 40 percent around the country," he said. "That's going to be due to increased hygiene measures and a bit of distancing that's occurring and we'll continue to watch that to see how that changes."

Bonning said that while it was great that people were going outside and getting active, safety was important.

"All we're keen for is for people to try to be responsible, take care of themselves and avoid that really avoidable alcohol-fuelled violence and motor vehicle trauma, the nasty stuff that people are really injured by."

"We are very vigilant and the concept of a second wave is very much on our minds."