The Highlanders have edged the Chiefs 28-27 in tonight's Super Rugby Aotearoa opener, in front of a raucous 20,000-plus crowd in chilly conditions at Forsyth Barr Stadium in Dunedin. 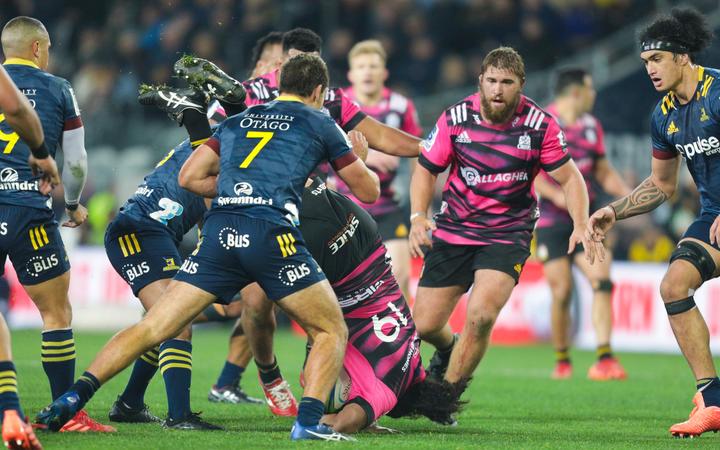 Super Rugby Aotearoa is the first professional rugby competition in the world to have fans return en-masse in the Covid-19 era.

Bryn Gatland gave the home supporters plenty to cheer about with his match-winning last-minute drop kick. The Highlanders had led 22 to 16 at halftime but the Chiefs - coached by Gatland's father, Warren - fought back to take the lead 27-25 with just three minutes remaining.

However, Bryn Gatland snatched the win with a 40m drop goal and just 60 seconds left on the clock.

Warren Gatland omitted All Blacks captain Sam Cane with a slight back niggle and left star five-eighth Aaron Cruden to make his impact from the bench as he looked to manage his players through the 10-week competition.

The Highlanders were also forced into a late change, first-five Josh Ioane stood down after suffering a groin injury and Mitch Hunt moving into the No.10 jersey from fullback.

The Chiefs took an early 6-3 lead from two Damian McKenzie penalties, but the Highlanders hit back with two tries in five minutes to lead 15-6 after 22 minutes.

Hooker and captain Ash Dixon barged over from close range after a well-organised lineout drive, then Sio Tomkinson snapped up a sublime offload from centre Rob Thompson for the visitors' second.

The Chiefs hit back as the half-hour mark approached, Sean Wainui finishing clinically after the visitors' crisp handling opened up gaps as they used the width of the field.

However, the Highlanders were down to 14 men after fullback Vililmoni Koroi's tackle on Naitoa Ah Kuoi earned him a yellow card after 32 minutes, and McKenzie's penalty gave the Chiefs a 16-15 lead.

But with just a minute of the first half remaining, the Highlanders scored from a lineout drive. First-five Mitch Hunt offloaded in the tackle and Mikaele Tu'u crashed over to give the home team a 22-16 halftime lead.

The penalty count mounted as both teams struggled with a new, stricter refereeing interpretation at the breakdown, McKenzie adding a fourth to his tally seven minutes after the restart. Hunt responded with another penalty on the 60-minute mark, but the Highlanders lost wing Jona Nareki to a yellow card two minutes later.

Anton Lienert-Brown crossed for the Chiefs in the 72nd minute to narrow the Highlanders lead to 25-24, then a McKenzie drop goal gave the visitors the lead for all but the last minute.