Police Commissioner Andrew Coster says police have no immediate plans to extend the use of sponge rounds to frontline officers. 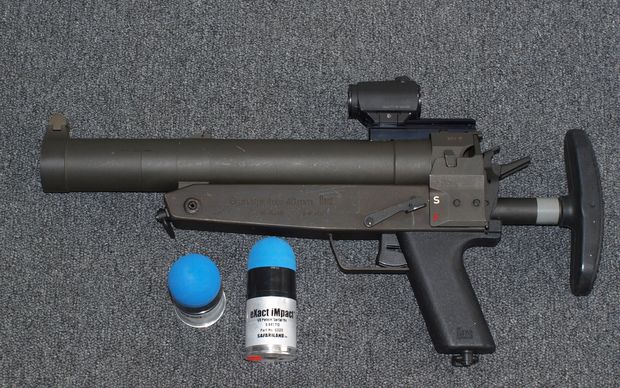 A sponge round and launcher. Photo: NZ POLICE

The weapons are designed to be non-lethal but have sparked outrage in the US where the police have fired them at Black Lives Matter protesters, causing serious injuries.

Armed Offenders Squads and Special Tactics Group nationwide have had access to the weapons that fire sponge rounds since 2015.

The large 40mm rounds are capped with sponge and cannot penetrate the body. They are fired from a gas launcher with a range of about 30m.

Lance Burdett, who spent more than a decade as a crisis negotiator working alongside the Armed Offenders Squad, said they were most effective being used against a solo offender.

"Where you want to take the person down [but] it is too dangerous to do so because of what they've got, they might have a weapon or a sword something like that.

"So therefore I would see them being a very valuable tool."

But Victoria University criminologist Trevor Bradley said they could cause serious injury.

"If you're hit in the facial area, or if you are hit around the groin or the crotch area it could cause a lot of damage."

Police Commissioner Andrew Coster yesterday floated the possibility of an expanded use of the weapons on Morning Report the day after a trial of mobile armed police teams was scrapped.

Coster cited the use of sponge round weapons during the trial as an example of a "less-lethal option" the police used to de-escalate situations.

This morning he said if police were going to propose any extended use they would "consult early and widely".

"I just want to be really clear. We have no immediate plans to roll out any further tactical options for the frontline."

Coster said he could not see them ever being used for crowd control as they have overseas against protesters in the United States, Hong Kong and Israel.

The Armed Offenders Squad and Special Tactics Group would continue to carry the weapons.

Sponge bullets could save lives where an offender would otherwise be shot, he said.

"We've had many situations in recent years where police have been legally justified in shooting an offender, perhaps an offender armed with a sharp weapon, however had such an option been available, that might not have been necessary and lives may have been saved."

Coster said his understanding was that the weapons were used in the Armed Response Team trials. There were no severe injuries during the evaluation, he said.

The Armed Response Teams (ART) were fiercely criticised for poor record keeping, a lack of community consultation, and that they would disproportionately target Māori and Pacifika communities.

University of Waikato criminologist Juan Tauri said in raising the use of the weapons the police commissioner was possibly trying to divert attention from the public outcry at the ARTs.

But he said this diversion backfired because everyone can see the carnage the weapons are wreaking in the hands of US police on peaceful protesters at Black Lives Matter marches.

"We've seen pictures of people who have lost eyes, there've been reports of mashed teeth, broken jaws, concussions from this weapon.

"I'm just really wondering who is doing the media strategy for the police at the moment when they are promoting this so-called non-lethal round when we're seeing how damaging it can be."

Coster said his comments were absolutely not intended to be a diversionary tactic.

"If I had thought more about the reaction it might cause I probably wouldn't have mentioned it. It was simply an example of one of the ways you can resolve situations without taking someone's life.

"I appreciate why people feel very concerned about this given what we see happenIng overseas," he said. "As I've emphasised the style of policing we aim for in New Zealand is not that that we see in many other countries."

Dr Tauri said inevitably these kinds of weapons would be used disproportionally against young Māori and Pacific people.

If the weapons were rolled out it would show the creep towards the militarisation of New Zealand police, he said.

Bradley said he feared the more comfortable police got using the weapons the more likely they would be to reach for them too often and in inappropriate circumstances.

"One would hope that police would use these very infrequently, if at all really.

"I can't think of any situation in New Zealand in recent years where the use of these types of weapons would be justified."

Auckland councillor for the Manukau ward Efeso Collins said he was shocked to hear the idea of the use of the weapons being floated.

"I'm completely taken by surprise... I'm really anxious about it.

"Here we are [the police] have just announced that they are going to not use the Armed Response Teams any more.

"And now we are going out with no evidence base whatsoever with sponge [rounds].

Collins said he would raise the issue in a meeting with the Manakau district commander on Friday.

Police said in a statement that the Armed Offenders Squad and Special Tactics Group would continue to use the weapons, and it is an option that "will be considered as part of the work being undertaken into our broad tactical capability".

RNZ asked Police Minister Stuart Nash if there were plans for police to expand the use of the weapons and was told in a statement that "no such proposal is in front of the minister, and he would expect to be consulted if there was such a proposal in the future".