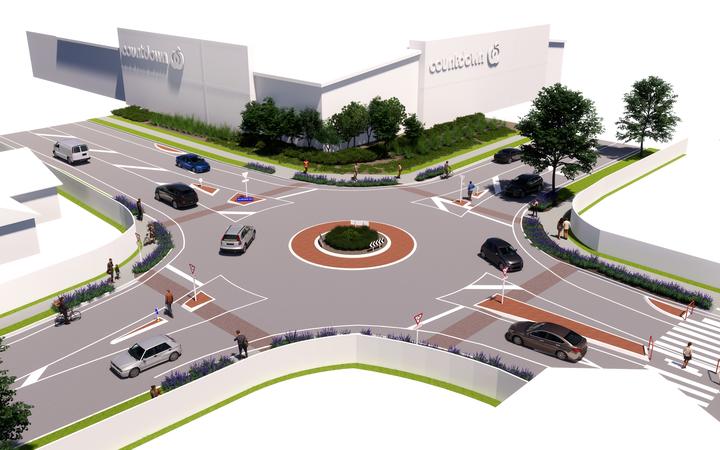 An artist's interpretation of what the Alabama Rd and Weld St roundabout will look like once the intersection has been "raised". Photo: SUPPLIED

The roundabout near Redwoodtown Countdown will be lifted by 120 millimetres - as high as a speed bump - and given a new central island and corner plantings to help prevent road crashes.

Four raised crossings were pitched for the roads off the Alabama Rd and Weld St roundabout last year to slow motorists, but residents feared they would be noisy, so the design was re-worked.

Marlborough Roads manager Steve Murrin presented a report to the Marlborough District Council on Tuesday which said the new proposal would reduce speeds but keep noises to a minimum.

It would also enhance the look and presence of the roundabout.

A zebra crossing would be put down on the roundabout exit closest to Redwoodtown School, with a speed indicator sign on approach. 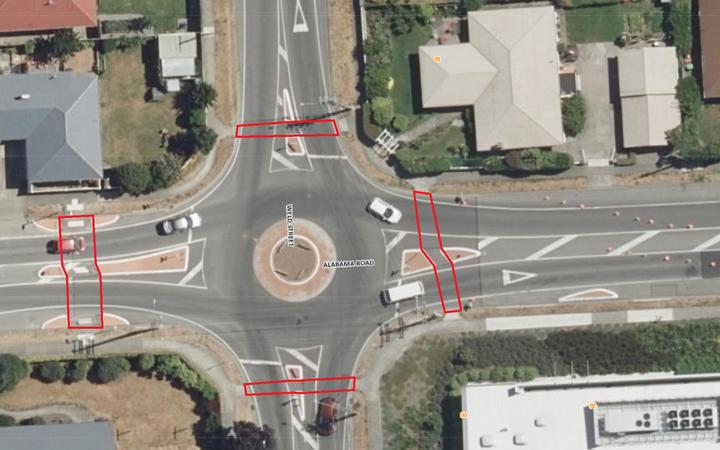 Highlighted in red are the sections of the roundabout originally earmarked for raised pedestrian crossings. Photo: SUPPLIED

The roundabout's current setup allowed motorists to drive into it at higher speeds thanks to its wide line of sight and small island.

There had been 14 reported crashes at the Weld St and Alabama Rd roundabout since 2015, three of which caused serious injuries.

Three of the crashes involved pedestrians.

Murrin said the roundabout currently cost the community about $550,000 a year in "annual trauma", or in hospital bills, Accident Compensation Corporation claims, and rehabilitation costs.

"There really needs to be something done about it," he said.

The alternative was going back to the original plan and raising the crossings on each roundabout leg to form pedestrian platforms. This would slow cars down, focus drivers on people using the crossings, limit the severity of crashes, and improve safety.

But the tighter turn would be more challenging for trucks, which could spill more grapes, and the ramps would increase noise.

Sticking with the 'status quo' would save the council money, but keep costing the community, and discourage walkers and cyclists.

Councillor Francis Maher, who holds the roading portfolio, said the roundabout was "notorious" for traffic accidents in Blenheim.

"Something has to be done here," he said at the meeting.

Councillor Cynthia Brooks said raising it was a smart idea.

The council approved the proposal at an assets and services meeting, and referred it onto the full council meeting on 25 June.

Once adopted, Marlborough Roads would consult nearby residents, businesses and Redwoodtown School, and then finalise a design.

Work was expected to start on the roundabout this summer.