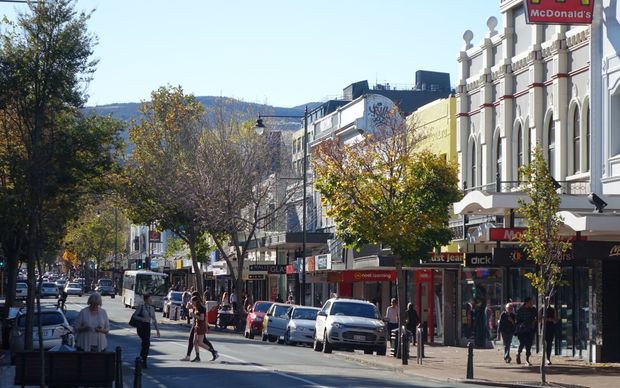 The speed limit of the city's main street was slashed from 30km/h to 10, and large blue and red dots were painted on it to remind motorists of the new limit. Photo: RNZ / Ian Telfer

Last month the Dunedin City Council used out of the box thinking to encourage people back to the central city after the Covid-19 lockdown, but it led many to suggest they had gone dotty.

The speed limit of the city's main street was slashed from 30km/h to 10km/h, and large blue and red dots were painted on it to remind motorists of the new limit.

Surrounding streets also had their limits lowered and the city offered free use of the footpaths to businesses and free parking to residents.

The plan raised the ire of many, mostly those who were not amused by large blue and red spots painted on the street.

The council conceded the measures were largely ignored and did not have the desired effect of encouraging physical distancing, but at the time they were implemented it was unknown how much of a hindrance central Dunedin's narrow streets would be to people returning.

About half an hour into the hour-long debate over whether to scrap the measures immediately or end them at alert level 1, councillors found out it was essentially out of their hands as the prime minister announced New Zealand's move to alert level one at midnight.

Its decision to end the measures immediately, essentially just a matter of process, passed by 14 councillors to one.

"For my mind that is a small price to pay for what was a precautionary approach to let people return to the city centre and do so safely, because we didn't know at that point whether it was going to be a deterrent to people or not."

Councillor Jim O'Malley pointed out the real cost of the plan was in the loss of parking revenue, estimated to be about $135,000 a week.

The council's infrastructure services general manager, Simon Drew, said few had adhered to the speed limit though there was a reduction in speed on the main street.

Chief executive, Dr Sue Bidrose, said physical distancing also did not appear to be a priority post lockdown to the city's residents.

"We noticed pretty much immediately when we moved to level 2 people were hugging in the street, rushing up and crossing the road and flinging their arms around each other.

Debate then turned to the future of the dots.

Councillor Carmen Houlahan was the most visceral opponent of retaining them.

"I have serious, serious concerns about leaving the dots on the road and I'll tell you why. I'm a mother with young children, the first thing the kids did when they saw the dots they went 'oh, look mum, we can play on the road - look at these playful dots'," she said.

Councillor Mike Lord, who was originally opposed to the measures, was a fan of the colourful display.

"Would there be any danger if we left the dots there and resumed the speed limit at 30 because I don't really have a problem with them," the councillor said.

Councillors voted to scrap the measures 14 to 1.

The speed limit would be returned immediately and the dots would be left to fade over the next few months with free parking expiring at the start of July.