The Dunedin City Council has approved a controversial suite of measures designed to entice people back to the central city after the Covid-19 lockdown. 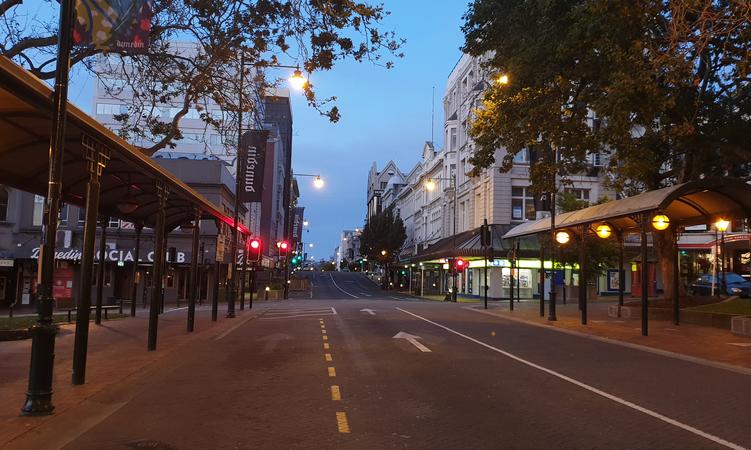 An empty Dunedin street on the first day of lockdown, the council has now approved measures which it hopes will entice the people back into the city. Photo: RNZ / Tess Brunton

The speed limit of the city's main street has been slashed from 30km/h to 10km/h - a measure panned by business and motorist's advocacy groups.

Surrounding streets have also had their speed limits lowered, pedestrians take priority over vehicles, free parking is available and businesses can use footpaths for free.

The measures would cost $40,000 and that was a sticking point for some councillors, especially given chief executive Sue Bidrose had already used about $10,000 of discretionary spending to prepare 70 10km/h speed signs so they could be rolled out immediately.

Councillor Jim O'Malley hit back at the criticism.

"This is a minor spend ... it's ridiculous to put this forward as profligate spending as I'm sure the word will be used later."

The temporary measures were designed to provide the public with assurance that they were safe to return to the central city as the threat of Covid-19 loomed over society.

They meant physical distancing could be practised without the danger of motor traffic speeding by.

Even prior to debate things got heated

But even before debate on those measures could get underway, things got heated when Councillor David Benson-Pope, who chaired the committee meeting, called on Councillor Lee Vandervis to apologise to Councillor Chris Staynes.

The debate was delayed yesterday when councillor Jules Radich was informed by the Auditor-General he had a conflict of interest and should withdraw.

He sought his own legal advice and asked the matter be set aside until this morning.

That raised issues for Staynes, who said he could not make a meeting today as he was moving house.

Vandervis claimed Staynes misled councillors yesterday when he told them delaying the meeting until this morning meant he would be unable to attend.

Benson-Pope threatened to throw Vandervis out of the meeting if he did not withdraw the accusation and apologise.

"I'm not going to withdraw a fact that is provable in the public record, yesterday it was not possible for him to attend today and here he is," Vandervis fired back.

The impasse was finally overcome, following an adjournment, when Staynes indicated he did not need an apology and acknowledged he made the comments but had juggled matters to be present today.

Radich withdrew from the debate as councillors decided against delaying it again until next week.

But the tension remained as Vandervis turned the calls for apology back on the chair after Benson-Pope told councillor Andrew Whiley to wrap up his questioning.

"I believe you have been disrespectful to councillor Whiley in saying that his questions sound like a quiz show - quote - and that - quote - you have had about 20 questions - unquote - which is untrue," Vandervis said.

Benson-Pope indicated he meant no offence and apologised.

But the battle lines were clear, Vandervis and Whiley were two of the most vocal opponents of the slowdown measures, and Benson-Pope among their supporters.

Fears of 'pedestrianisation by stealth'

Opponents fear the measures were designed to bring about pedestrianisation of the central city by stealth.

A hangover from the Octagon Experience, a series of trials to make the area pedestrian-friendly earlier this year, which saw business and the council butt heads.

Council chief executive Sue Bidrose attempted to clear the air and said she took several options off the table so it would not be viewed as the Octagon Experience 2.0.

"Some things were specifically said to be, by me, off the table. First of those were planter boxes. My concern was that this would be seen as pedestrianisation by stealth, that people would say this was a lunatic extension of the Octagon trial and other such emotive terms."

Bidrose told councillors the divisions over the measures were not only present in the public and around the council table, but also among council staff - some did not think they would work or were necessary.

But O'Malley said whatever reservations existed about the measures, common sense needs to prevail.

"For people to say that we are basically trying to bring about pedestrianisation by stealth, they're ignoring the fact that what we are trying to do is address the public health issue the best way we can," he said.

Several councillors pointed out the measures were about giving the public the confidence to return to the city, because without it businesses would also fail.

"We have had a message from the community through the annual plan hearings that people are fearful and need reassurance to return, and personally level two feels a whole lot riskier particularly for those who are health-compromised."

The mayor, Aaron Hawkins, addressed claims this had become an ideological matter.

"This has been called part of a wider ideological drive, well of course it is. Everything is ideological," he said.

"Every opinion expressed by every person in this room is a product of ideology. A product of your values, your knowledge and your perspectives and your opinions. That's what that means."

No decision could be made in an ideological vacuum, he said.

The measures passed with the support of nine councillors to four.

Work began immediately to put them into effect, and they would remain so as long as physical distancing was required because of Covid-19.