By John Lewis of

A new $145,000 slogan, aimed at enticing New Zealanders to visit Dunedin, is getting a D-grade from many online. 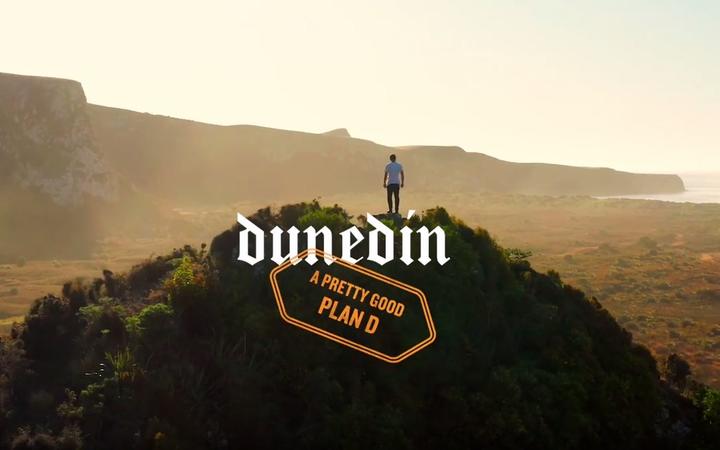 An image from the new campaign. Photo: YouTube/ Enterprise Dunedin

The slogan - "Dunedin, A Pretty Good Plan D"- is Enterprise Dunedin's self-deprecating and wryly humorous nod to the fact the southern city may not be people's first choice of destination.

The Dunedin City Council's destination marketing arm described it as "an intriguing, high impact new domestic marketing campaign" which highlights the city's many attractions in an unfolding story of references to famous international visitor hot spots, with stunning creative imagery backing up the connection.

But Dunedin residents took to social media to disagree yesterday.

"I loathe this!!! Dunedin really needs to realise that it's awesome and the best little town to live in, work in and visit. Stop apologising for being the best little city anywhere, and start wearing it with pride!" one person wrote.

Another said: "Not a winner, I'm afraid."

And another said: "Weak puns are a poor marketing tool as they can be interpreted easily in the negative context."

Ex-National MP Katherine Rich said it was "a bit Eeyorish".

The most positive reaction was: "It's so bad, it's actually rather good."

Enterprise Dunedin director John Christie said inspiration for the slogan came from the fact New Zealanders had to cancel their international travel plans this year, and many would have been heading to bucket list locations and activities overseas.

"Dunedin may not have been their first choice, but it is a pretty good Plan D and can offer alternatives that are comparable to those found in Europe, Asia, Australia and the United States.

"The initial focus of the campaign would be on the four to five-hour drive market, i.e. people in Canterbury and the southern South Island regions.

"It will then expand to the Wellington and Auckland fly market."

He said Enterprise Dunedin liked to be "edgy" with its campaigns and this one was "in-line" with others to make sure the city was noticed.

"You'll always get a mixed reaction, no matter what you're putting out there. So we were expecting this.

"Everyone's entitled to their opinion, but what matters is that this has enough cut-through to get people to want to come and visit the city," Mr Christie said.

He made clear the campaign was widely discussed and supported by tourism operators and stakeholders before it was launched and made public.

The total package for all of the advertising (including trans-Tasman marketing) would cost $145,000.

However, he was confident the campaign would have a significant financial impact.

"Prior to Covid-19, the domestic market was our largest in terms of spend, accounting for $527 million in the year to March 2020."