Dr Ashley Bloomfield says there have been no further cases, and more than 92,000 people have downloaded the Ministry's contact tracing app on its first day of release.

Dr Bloomfield said New Zealand's confirmed cases was at 1153, and the combined total of confirmed and probable cases was 1503.

There were no further deaths, leaving New Zealand's total at 21.

Another five people had recovered, bringing recoveries to 1447 or 96 percent of cases, and only one person was in hospital - at Middlemore - and they did not require ICU care. 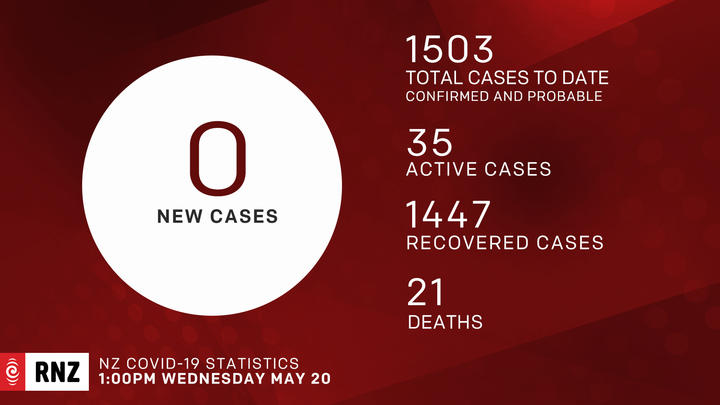 Dr Bloomfield also spoke about the NZ Covid Tracer app which was officially released today. He said over 92,000 users had already registered, and over 1000 businesses.

He said privacy was one of the key concerns used in developing the app, which was why all the information remained on the phone rather than being broadcast anywhere else.

"All the information remains on the phone. It is not shared anywhere," he said.

The information stored on the phone would also be automatically deleted after 31 days, he said.

He said the app was another tool in New Zealand's toolbox to help contain the virus and prevent its spread.

"At this stage the main point is to get people registered, downloaded with the app, and then it does have benefit to them because it helps with them maintaining a record of where they have been in a simple way.

"Most people know when they have been at home, and who they've been with, or when they've been at work, so this is when they're visiting other venues - retail outlets and hospitality venues in particular."

He said the app used QR codes, which were generated using the nationally used New Zealand business number, and said it would only be used for contact tracing purposes during the Covid-19 crisis.

He said the app could be used in conjunction with other apps or people could simply download and register and continue to use either this or another app.

Dr Bloomfield this morning told RNZ the government's new contact-tracing app would be helpful for getting the country towards level 1, but the biggest factor was still the number of cases.

In an interview with RNZ's First Up today he reflected on what had unfolded in the eight weeks since the country went into lockdown.

Dr Bloomfield also spoke about the World Health Assembly, and said it was continuing to work on the Covid-19 resolution.