New Zealanders left behind in India are asking for additional repatriation flights to evacuate them, after the government did not have enough capacity to return everyone who wanted to come home. 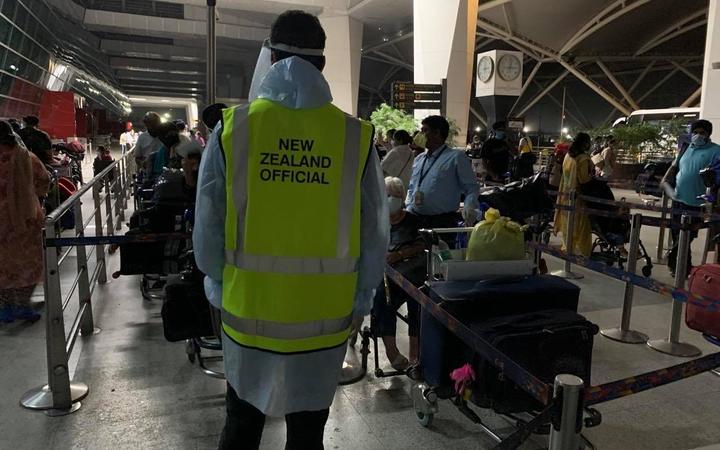 More than 700 citizens and permanent residents returned on the three flights from New Delhi and Mumbai, the Ministry of Foreign Affairs and Trade (MFAT) said, the last of which returned on Thursday.

However almost double that figure - 1360 people - expressed interest in the flights. Some people changed their mind, and others couldn't travel for a variety of reasons. The remainder were left behind and now have no clear path home.

"Due to high demand for the flight, we have unfortunately not been able to offer seats to all those who would have been eligible to travel to New Zealand," an MFAT email to registered New Zealanders said, regarding the third flight from New Delhi.

"Until such time as commercial flights re-commence or other countries' chartered flights become available to New Zealanders, we continue to encourage New Zealanders to stay safely where they are."

Navjot Matharu's 52-year-old mother is in New Delhi. She registered for the flights and was willing to pay but did not receive a ticket, and is now stuck. She's a permanent resident, unable to return to her full-time job or home.

Matharu said it had been a stressful situation, fearing there wouldn't be any commercial flights available for months.

"[The government] haven't said there aren't any plans [for future flights], but they've just said 'we're looking into it'. I think it's a nice way of saying 'no more flights'," he said.

He said he understood flights were complex to organise.

"I'm already grateful that they've done so much. They've still got 700 people out which is a big number. But now half of them are saying 'well you got those people out, why can't you get us out?'.

"They've already done three flights so they have the process. People are willing to pay for it, so I don't see why it is so hard to put on another few flights and get the rest of the people out as well," he said.

Other governments - such as Australia - have some flights planned which New Zealanders can apply for. Thirty-four New Zealanders took up such offers leaving from Kolkata and Chennai.

"[If it] was 20 or 30 people [left in India] then ok sure, we'll just have to suck it up until things get better. But unfortunately what I've seen is that a lot of people are still there and are willing to pay for the flights as well," Matharu said.

MFAT has worked with other countries to help New Zealanders onto flights heading to travel hubs, where commercial flights are available.

"So far the New Zealand government has helped more than 1570 New Zealanders and their families access government or privately facilitated repatriation flights from around the world," an MFAT spokesperson said.

"We have facilitated a number of flights including from Brazil, Chile, Peru, India and in other countries across South and South East Asia. We are also looking at options for helping New Zealanders in South Africa."

It said not all the seats on the flights were full, for both social distancing purposes and no-shows on the day.

"This has been an extremely complex operation and it has taken time to get everything in place.

"Not all available seats were filled for these flights as, on the day, some were unable to make the flight due to health reasons, or because they changed their minds. It was not possible for us at the last minute to fill all available seats with other interested individuals.

"New Zealand citizens and their families within a reasonable distance of New Delhi or Mumbai were offered the opportunity to join one of the three repatriation flights leaving these centres. Unfortunately, we were not able to provide seats to all those who would be eligible to travel to New Zealand.

"We remain committed to helping New Zealanders wherever possible, but it's important to know that government-chartered flights are complex, time-consuming and costly to arrange. New Zealanders wishing to return home must explore all commercial options."