An eyewitness says a car being chased by police in New Plymouth was travelling at least 100 kilometres an hour before it t-boned into another vehicle after running a red light. 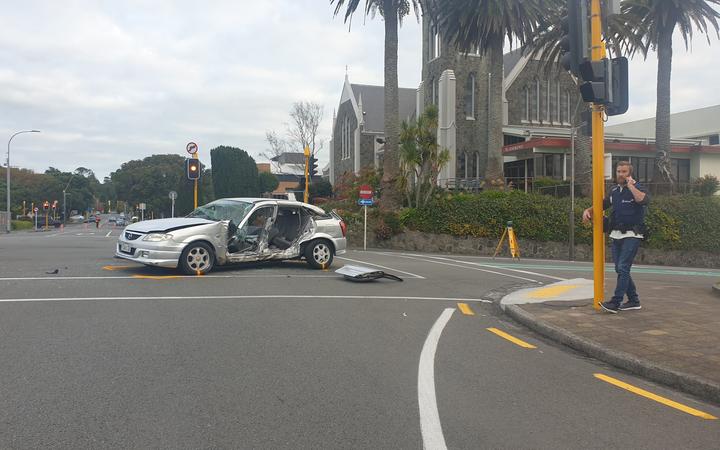 Two people were seriously injured in the crash which happened at about 1pm.

Rob - who didn't want to give a surname - said he first noticed police lights in his rear vision mirrors on Courtenay Street.

Rob said he then saw a shirtless man clamber out of the hatchback and try to take off before being arrested.

Taranaki Area Commander Inspector Belinda Dewar said police were called to a disorder incident involving involving a group of people in a New Plymouth suburb at around 12.40pm.

On arrival, police attempted to stop a vehicle that was seen leaving the address.

After the vehicle failed to stop for police, a pursuit was started and then abandoned, due to the driver's manner of driving.

Shortly after, the vehicle was seen driving at excess speed before it crashed into another vehicle at the intersection of Courtenay and Liardet streets.

Police have arrested a man in relation to the incident and further enquiries are continuing.

An internal investigation will be commenced and the Independent Police Conduct Authority will be notified.

The officers involved in the incident were not injured but will receive welfare support over the coming days.