New Zealand moved down to alert level 3, with some businesses reopening, and restaurant takeaways brought hope to many looking for some respite from daily cooking. 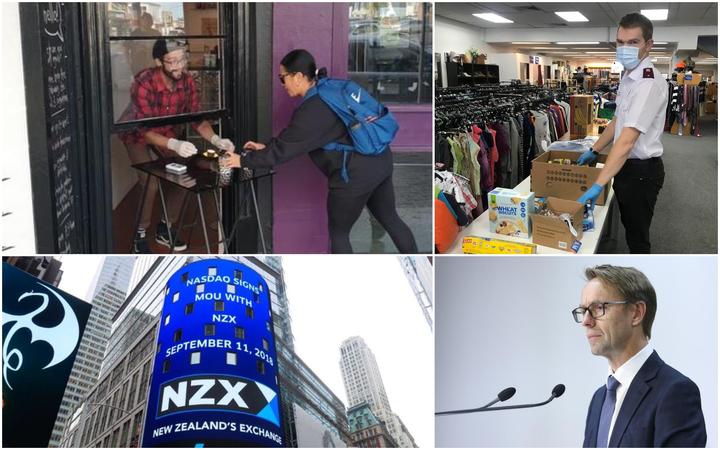 About 400,000 New Zealanders are believed to have gone back to work today after the five-week lockdown.

The Epidemic Response Committee heard from the hospitality industry, retailers, health and beauty practitioners and the Auckland Chamber of Commerce on the impact of the pandemic.

The new national total of confirmed and probable cases of Covid-19 is 1472.

As of 28 April, there were two new confirmed cases, one new probable case, and no further deaths.

There are nine people in hospital with the coronavirus, with one in intensive care.

Prime Minister Jacinda Ardern said people needed to continue to stay home where possible, stay regional when travelling, keep bubbles small and exclusive, and if people are feeling sick they should stay home, call their GP and get tested.

New Zealand has been making international headlines after the prime minister and Director-General of Health Ashley Bloomfield talked about "eliminating" Covid-19 yesterday.

It led to questions about the formal definition of elimination of the virus.

Today Dr Bloomfield walked back on those comments. "I can just clarify we haven't eliminated it, and we haven't eradicated it."

The immigration industry says officials are being hamstrung by the government in their efforts to sort out visa problems.

But immigrants who have lost their jobs, were waiting for visas or who were locked out by the border closure say they have been left in limbo.

After a period of hibernating over the lockdown period, the housing market could pick up again under alert level 3.

The government has confirmed that private, tightly-controlled, viewings can now go-ahead from this week.

The industry said it's hard to tell who will be selling and buying in the coming months, until the real effects of the pandemic become apparent.

Economists are picking the Official Cash Rate (OCR) will drop to negative 0.5 percent before the end of the year, despite the Reserve Bank promising to hold it at 0.25 percent until March 2021.

In March, the OCR was slashed by 75 basis points, with banks adjusting their floating rates immediately, and some cuts later to other lending and deposit rates.

The New Zealand share market rose sharply today but there are warnings that the wild ride is not over.

People are rushing to buy shares, even in companies that are struggling to survive, as the markets recover from the most dramatic falls since the global financial crisis of 2008.

Delivering services from a distance

Time Out Books manager Jenna Todd was passing pre-ordered books to customers on a pizza peel this morning.

Ashleigh Duncan from Ace Coffee Shop on Dominion Rd has been flat-out making coffees all day, separated from her customers by a glass screen.

Pawan Pandey from Mt Eden Rd restaurant Monsieur Madame was thrilled when a couple of online orders came through as early as 10am.

Many Aucklanders had been salivating at the prospect of their first takeaway in weeks, with some having drawn up a week's worth of takeaway options of burgers, curries and noodles.

In New Plymouth, customers began queuing at a McDonald's drive-through at 3.30am and by the time the fast-food restaurant opened at 5am, about 40 vehicles were snaking through the car park.

More people in need in Queenstown

Community leaders say the worker crisis in the Wakatipu has not reached its full extent, as they brace for more requests for food and clothing over the coming weeks.

Queenstown Lakes District Mayor Jim Boult told councillors that the district's economy is predicted to shrink by 40 percent with unemployment likely to reach 25 to 30 percent.

More than 8400 welfare requests had been made to the council since the Covid-19 outbreak.

And 95 percent of the people contacting the Salvation Army are those who haven't used their services before.