They're the people who give you a helping hand - at the pool, the library or art museum.

Many do it for love rather than money. But the money definitely helped pay the bills. For some, that has stopped. 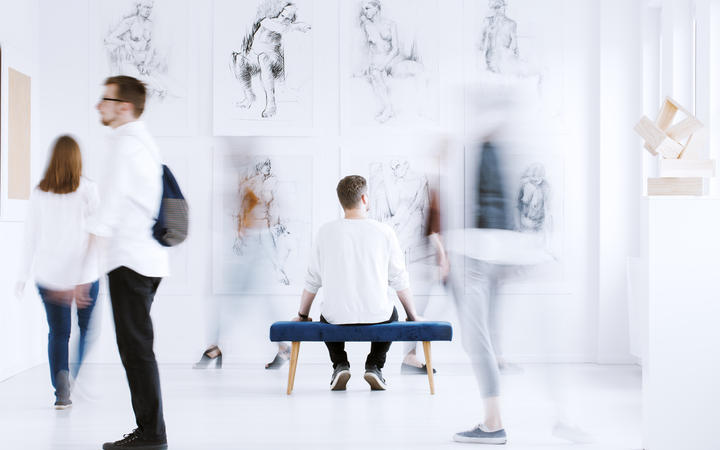 A casual art gallery staff member is among those who have lost their income Photo: 123rf

For Simon*, a student, it is about being treated right.

"I like my bosses at the pool. I just don't like what the council is doing at the moment."

RNZ has recently been documenting the stories of workers who were employed as casual staff by publicly-funded entities.

While they are on casual contracts, many had been working the same number of weekly hours for years. A similar situation in DHBs prompted an intervention from Prime Minister Jacinda Ardern, who said such staff should be paid.

Councils don't rely on central government for funding but the State Services Commission has issued advice which suggests council workers on long-term casual arrangements with regular hours should continue to be paid. This is also in line with legal opinion.

Simon had been working 15 hours a week for four years across the same days but his council employer has refused to keep paying him. Most of the 30 pool staff were casuals, with about a third of them joining him on a regular pattern.

"I should no longer be treated as a casual but in partnership. I'm a student and I rely on the income."

The council told him it was paying an extra week beyond that worked, but it could not afford more due to budget pressures. He'd also been told councils could not apply for the wage subsidy because they were a government entity and couldn't prove a 30 percent revenue decline (one of the main criteria).

Alex* had been working at a council-funded art museum. Entry was free, so proving a revenue drop isn't an option.

"Some of the people I work with are called casuals but have been working four days a week for years. It is their main source of income.

"If we were working in a cafe down the road, we'd get paid the subsidy but when you're a council worker you get nothing?"

He said as well as the money there was a principle at stake.

"A lot of people have been working here for a long time. They do it not just for the money but because they want to help. Then they're not shown any respect. It's pretty disheartening."

PSA national secretary Glenn Barclay said there was an issue around "so called" casuals but the approach differed from council to council.

"The question is whether or not, as the PM has talked about, people have had consistent and ongoing employment. Then in our view the employer should step up and pay.

"There are a considerable number of people in this position and it's a vulnerable situation."

Barclay said there were about 70 councils and their approaches to casuals varied greatly - they were effectively many different governments.

However, he said councils were able to apply for the wage subsidy and weren't excluded like central government departments. Councils had been provided with this advice by the Ministry for Business, Innovation and Employment.

He said while it was a challenge for councils to prove a 30 percent revenue decline, some of their businesses/divisions were able to do so.

Barclay recognised it was a challenging time for councils and the PSA was urging them to be open and transparent about future plans. It was also worried about what happened to conditions, jobs and services once the lockdowns ended.

A Local Government New Zealand spokesman said it had not been approached by councils for advice about pay for casual staff.

He said given the way councils were funded it was unlikely they would be eligible for the wage subsidy but council-controlled organisations may be able to apply and "should do so if they believe they meet the criteria".

"Unlike central government agencies, councils and CCOs aren't funded to pay casual employees who are now unable to work due to the lockdown. While some casual workers may have more established shifts, others may be more intermittent," the spokesperson said.

Councils were facing a broad reduction in income, not just from rates, but across the 40 percent of income on average that is derived from fees, charges, investments and dividends.

"Councils are running the rule across their books to reduce spending where possible, but are mindful that they will have an important role to play in New Zealand's recovery, not just economically, but socially and culturally, as they provide a huge array of recreation and community facilities and programmes that bring us together," he said.