Living in the Jenkins household at Ohope beach is like "living in the land of the giants", says Dad Mark Jenkins. 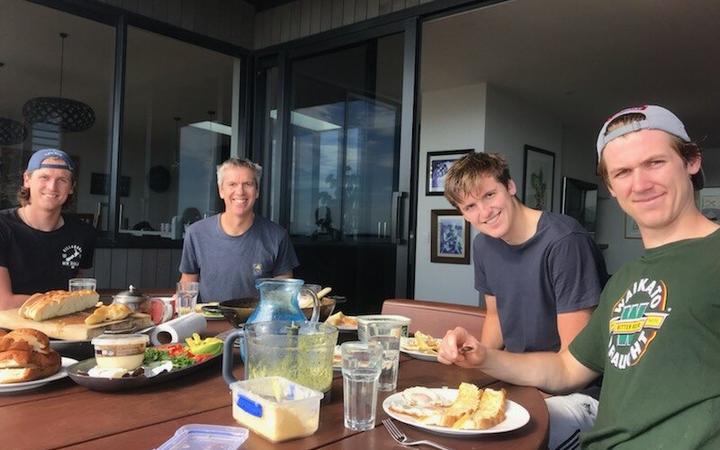 Mark Jenkins at home with his sons. Photo: RNZ

He's talking about his three sons, Lenny, 22 and 19-year-old twins, Elliott and Finn, all rowing champions who had to rush home from their universities in the US when Covid-19 panic hit.

Now they're all back at their Bay of Plenty home they've settled into a routine that involves a lot of eating, study and exercise.

"Two of them are six foot seven (2m), one of them's about six foot four, I'm a tiny six foot one and I feel like a complete midget and Mia (their mother) is about five foot eleven," said Mark.

The daily routine starts before dawn because two of the boys have to hook up with their universities.

Then it's breakfast time.

"You'd expect there would be weetbix and milk or something like that but no there were 10 sausages leftover from dinner last night so they're all gone now, so we've had sausages and mashed potato with tomato sauce and bread for breakfast but that's just the first course," said Mark.

"They talked me into buying them some Irvine pies the other day so I succumbed to that because they don't get a pie in America," said mother Mia. "I think Elliott and Finn had one this morning and they reckon they were the food of champions."

During their first two weeks in quarantine Mia wanted to have a go at being sustainable and planted up a vege garden and got in some chooks.

"Unfortunately the chickens haven't done very well, we've had four eggs so they not proving very professional ladies at the moment. The boys are eating about 20 eggs each a week so we're not making much of a dent on that,' she said.

Mia, an architect, and Mark, who has an accounting software business, both work from home.

Most days Elliott, who's completed his marketing and advertising studies at Boston for the year, goes to work on a dairy farm. 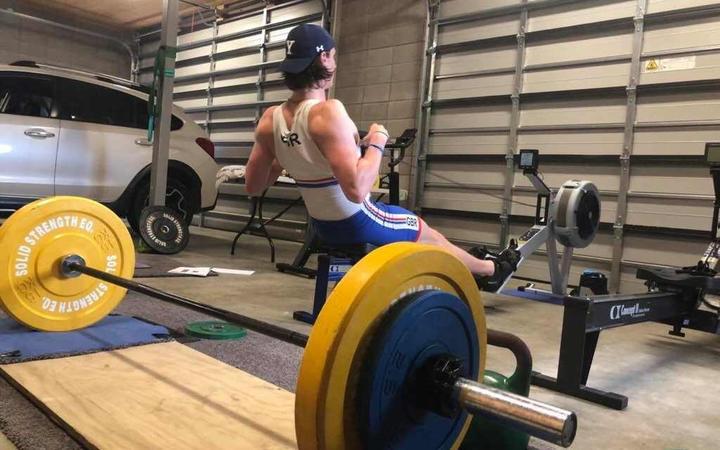 "My routine is normally training in the morning then going to work throughout the day which is nice, it kills my day quite a lot," said Elliott.

Lenny is close to finishing his degree in political science and energy at Yale and his day starts with a 5.30am seminar.

Finn starts at 6am with full immersion German classes online with Brown University.

"I'd rather be getting up and having breakfast first rather than putting a nice t-shirt on over my pyjamas and speaking German," said Finn.

All three have been rowing for their US universities but the twins' goal is to represent New Zealand.

Lenny is in the British national team and wants to have a crack at the 2024 Olympics and that means running, riding or rowing up to 190 kilometres a week and lifting weights which he initially fashioned from stuff around the house.

"I got a bit of rope and a bit of kayak ankle line and I tied that around some bits of old foundation from the house and I was using those....but since then I've actually got some olympic weights from a friend of mine," said Lenny.

They're all grateful to be home but getting back together was an ordeal for all of them.

While the boys were rushing to pack their bags and get on flights Mia and Mark were caught out on the other side of the US, en route to England.

Mia turned around at San Francisco and went straight back home while Mark continued onto to London for two weeks of work.

"When I got to London it was really quiet and I just thought, oh jeepers, I've made a real mistake here."

He caught a taxi to his apartment had "a curry and beer" and got back on a plane home as soon as he could. Altogether he flew for 54 hours over four days.

"The world was shutting down as I was flying home," he said.

Back at Ohope with the three boys, Mia could only watch online as Mark's flights were "inching their way across the globe, hoping he was going to make it back ok, it was pretty scary".

The pandemic has thrown the brothers' study and rowing plans into turmoil but they say family time and a kiwi diet of feijoas, pies and homemade bread make up for it.