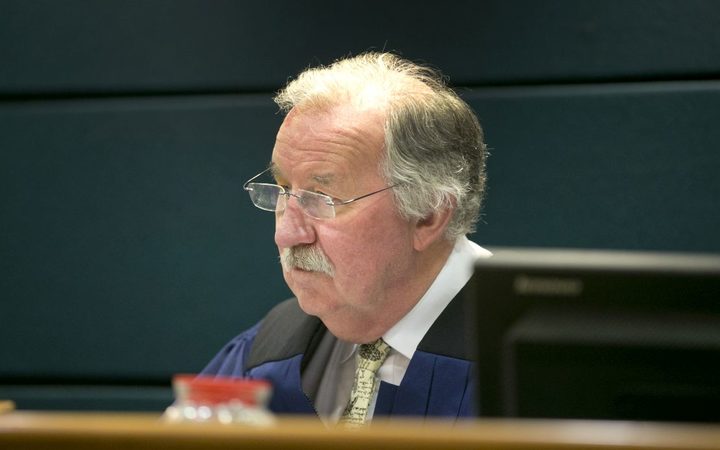 Wallace Bain says he is deeply concerned about the horrific child abuse figures in our country. Photo: Pool / Alan Gibson

Throughout his tenure, Bain has been involved in some of the country's most high-profile inquests, including those of Nia Glassie and Moko Rangitoheriri.

In a written statement, he said it was the child abuse cases that had most stuck with him throughout his career.

"I'm deeply concerned at the horrific child abuse figures in our country. Along with the increasing suicide statistics, especially youth suicide."

Many of Bain's recommendations have been adopted to prevent future deaths, including fixing roadways, amending hunting rules and recommendations about bullying and text messaging.

Formerly Mayor of Waitomo, Bain first began working in coronial services part-time in the King Country and Taupō areas in 1992.

He was appointed as a full-time coroner in 2007 when the new Coroners Act came into effect and played an instrumental role in reforming the coronial system at the time.

He is also a registered pharmacist who practised widely in the health area and chaired NZRFU's former Super 10 and Super 12 judicial committees.

He said it had been a real honour to serve as a coroner and work with a wonderful team of coronial staff.

"New Zealand is very lucky to have such dedicated and outstanding people serving the Coroners Court and I am pleased to see the appointment of new coroners to help with the volume of work."

The Attorney-General has appointed eight relief coroners to help reduce a backlog of cases in March.

Chief Coroner Judge Deborah Marshall thanked Bain for the passion and energy he brought to his work.

"He has shown a great commitment to find the truth and has served his community well. I hope his retirement brings a well-deserved opportunity to relax and recharge."

His last day of service will not be celebrated as normal due to Covid-19 measures, which have suspended coronial inquests.

"To my fellow coroners, judges, staff, and local press: you do outstanding work. You have been a wonderful team to work with.

"After climbing the mountain, I can finally enjoy the view. I will retire from work, but not from life."