New Zealanders abroad scrambling to return home will still be able to enter the country after it goes into nationwide self-isolation tomorrow at midnight. 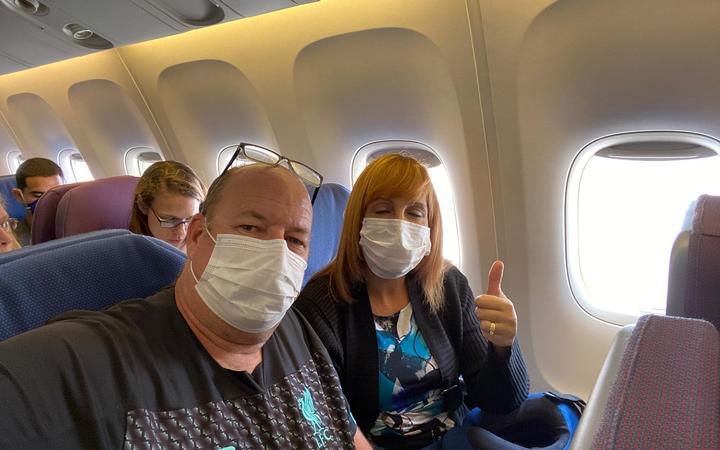 The government last week urged all New Zealanders travelling overseas to return home, but some New Zealanders stuck in remote locations around the world are still desperately searching for a way back.

New Zealanders Ian and Vicki Philips were on the trip of a lifetime in South America when the Covid-19 crisis escalated internationally.

When they left New Zealand at the end of February they were told it was still safe to travel. They were at Machu Picchu when that message changed.

Philips said they were woken in the middle of the night and told Peru's borders were closing.

The couple caught a train and then drove two hours to the airport, where they caught a connecting flight to Lima International Airport.

They then planned to leave the country for Chile: "the flight to Santiago was gone, the booking was not there."

The couple bunkered down at a nearby hotel. Two days later, their travel agent achieved the impossible - and tracked down two seats on a private charter flight to Miami. 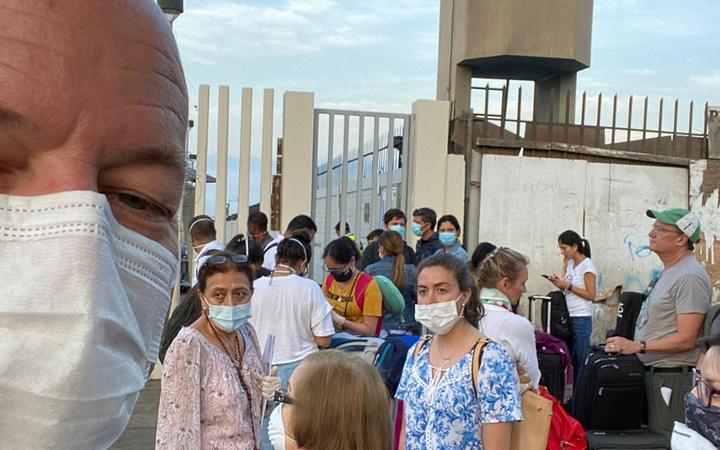 Ian Philips waiting to board a chartered flight in Peru. Photo: Supplied

Philips described what it was like to leave Peru.

The couple is now on the last leg of their trip and should arrive back in the country today. Philips said it was not possible for them to leave Peru any earlier.

"It's not like we're 15 minutes from an airport, we were in the middle of the Andes mountains for God's sake, and you've got time differences, things happen at night and we don't find out until the following morning, it's just logistically impossible.

"We've done our utmost to try and get out as quickly as we could. We are the fortunate few."

'We're not holding our breath'

There are about 80 New Zealanders registered as being in Peru and the majority of them haven't been as lucky.

About a 20-hour drive away from Lima, and the country's main international airport, Holly Bates and her partner Karl Damon are stranded in Puno.

Caught up in strict lockdown measures, they've been trapped in their hotel for days. 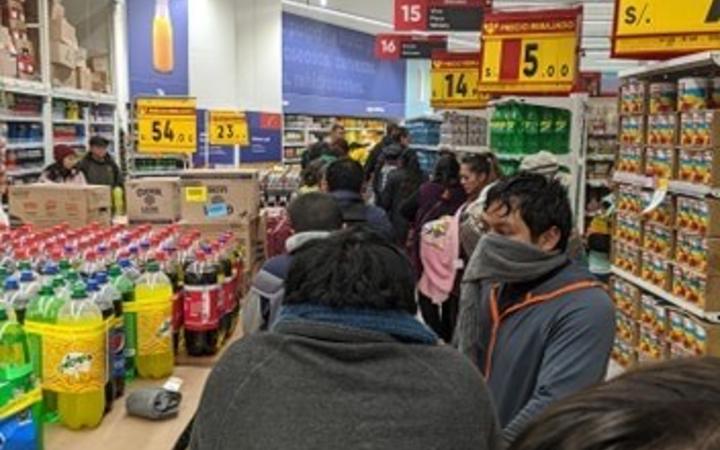 When the lockdown was announced earlier this month, the hotel's manager gave them one opportunity to buy enough supplies for at least 15 days.

"I've honestly never seen that many people squished into one confined space, there would've been a couple of thousand people all lining up. Once we had finished our grocery shop, we were in the line for about an hour trying to get through the checkout once we'd actually grabbed items.

"By the time we had finished, there was a line out the door just to get into the supermarket, which probably went 500m down the road."

The doors of their hotel are now chained shut and soldiers are stationed on every surrounding street.

"We are lucky, we are allowed to leave our hotel room ... I guess we can walk from within our hotel ... we obviously can't leave the premises, but there is a roof we can get to to give us some fresh air, which is quite nice." 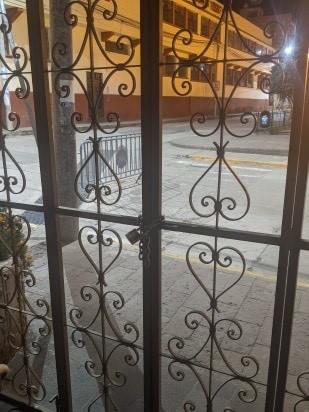 The hotel where Holly Bates and her partner Karl Damon are staying has been chained shut. Photo: Supplied

There have been some charter flights out of the country, since the shut down was enforced - like the one Ian and Vicki Philips caught. But because the flights are departing from Lima, the couple has been told they are too far away and cannot travel to catch one.

Bates said they had booked two tickets for one of the few departing commercial flights once the government imposed lockdown was expected to end.

"We've been in contact with our travel agents and they're saying that these are still live at this moment, but the issue is, other people have had flights cancelled on the same day or very similar flights. Some of them have actually had the same flights cancelled that we're on, yet our's haven't been.

"We're not holding out breath that we will get on these flights."

The Ministry of Foreign Affairs and Trade said the government was continuing to explore all possible options to help New Zealand travellers overseas, including the feasibility of assisted departures, but it said this was not guaranteed.

Meanwhile, All of Government Controller John Ombler said New Zealand residents and citizens were still able to enter the country - despite the government raising the alert level to 4.

"There will be a continuation of processing people on arrival, with health officials continuing to screen.

"As people enter, they will be required to go into self-isolation. If people live close to where they land, the intent is they can go directly home. If they live a distance from the point of landing, other self-isolation arrangements will be necessary."

The influx of people arriving in the country has reduced significantly, Ombler said.