The government has outlined details of its national response to Covid-19 as the nation prepares to go into lockdown. 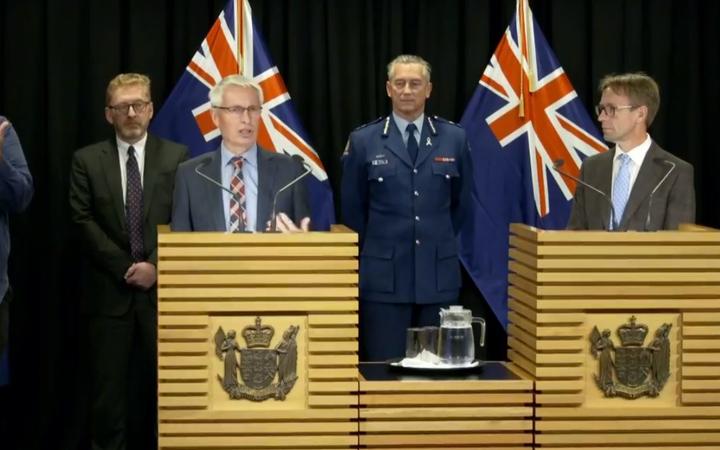 All of Government Controller John Ombler addressed a media conference, along with other key personnel involved in the response.

Ombler said it was clear there would be significant disruption to everyone, "but the alternative would be far worse".

"I'm confident that this all of government leadership is the best way to support the community.

"These are restrictions to save lives."

He said the team he led had been in action for about two weeks and the National Crisis Management Centre had been activated on 12 March.

"We have multiple streams of work underway in policy, operations, communcations and in the legislation space. We are a very large group of public servants working on our Covid-19 response."

The team was working alongside local government and the private sector.

"All of this work is urgent," he said.

Essential services would continue to run.

Ombler said that list was not prescriptive and it could -and would - be reviewed.

Civil Defence Emergency Management (CDEM) director Sarah Stuart-Black said under stage four, powers under the Civil Defence Act would be enacted, and the country would be in a state of emergency.

Stuart-Black said powers under a national state of emergency would "enable us to be able to close or restrict access to roads or public places, remove or secure dangerous structures or materials, provide rescue, first aid, food, shelter, conserve essential supplies, regulate traffic, dispose of fatalities in terms of people that have passed away or animals, enter into premises to rescue people or save lives, evacuate premises or places, remove vehicles and vessels, requisition equipment and materials and assistance".

She said tasks required by CDEM would be carried out be central and local government, emergency services, the defence force and a range of other agencies.

Ombler said he would not rule out the Defence Force being on the streets, if it came to it.

"For a level of comfort, I'd be happy to see them there. If it got to the enforcement side, I'd be disappointed, but I wouldn't rule it out."

Ombler said as authorities worked through all the various scenarios that may come up during the lockdown, information would be provided to the public.

He said the influx of people into the country had significantly decreased.

He reiterated that people did not have to stay locked up inside - they could go out but had to stay apart from other.

Ombler said the all of government response team was meeting several times every day, starting at 7.30am.

Police commissioner Mike Bush said said more officers would be on the streets "almost immediately", but he hoped it wouldn't get to the point where restrictions had to be enforced and officers' first role was to educate people about what to do.

He said police would intervene to make sure supermarkets were safe if it came to it.

Police would be on the lookout for any unlawful behaviour and anything that brought others' safety into question, Bush said.

"Our prime objective here is to deter people from doing anything that causes harm to others."

Bush said police had been seriously considering the issue of domestic violence during the lockdown.

"I would encourage neighbours to be looking out for each other, regardless of the circumstance."

He said the defence force had already been working with police.

The NZDF provided expertise on logisitics, intelligence and operations.

"Hopefully we will never need the defence force but you always want to be prepared so they are quite willing, at our direction, to work alongside us while we are out in the communities."

He said police did not want to have to enforce restrictions, but they would, if they had to.