Indoor weddings and funerals of more than 100 people are banned as the government tries to combat the spread of Covid-19. 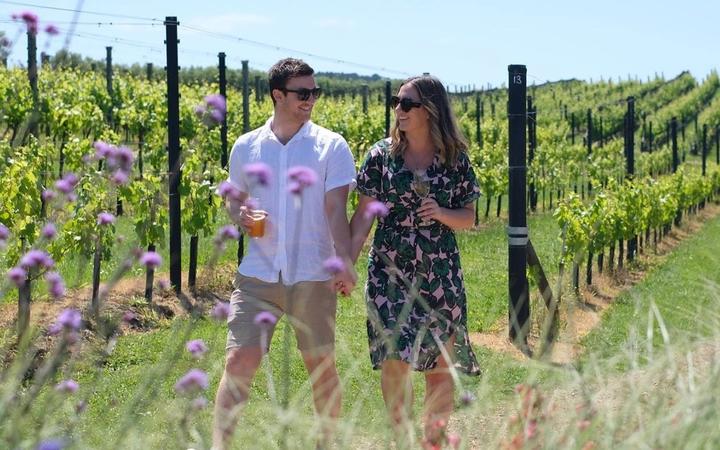 Anna Bain and Nate McKinnon on Waiheke last year. The couple has had to postpone their wedding by a year due to coronavirus. Photo: Supplied

Anna Bain should be having her final dress fitting about now.

The Christchurch woman and her partner, Nate McKinnon, were due to tie the knot on 1 May.

But coronavirus has forced the couple to push their special day in Wanaka out by a year.

"It's tough, it's so tough. It's something that you plan and you dream of and you want your day to be perfect," she said.

Health Minister David Clark yesterday announced a ban on indoor gatherings of more than 100 people and said those that do go ahead may face legal action.

Shortly after that, Prime Minister Jacinda Ardern announced the borders would close to those who weren't New Zealand residents or citizens on Thursday night.

Anna Bain said the couple had family coming from Canada and Australia and didn't want them to miss out.

"People in our bridal party that are in Australia wouldn't have been able to come over... It wouldn't be the same.

"We also got that feeling from a lot of our friends and family as well - even Christchurch-based - they were getting a bit nervous about travelling and being in a big group."

She said most of their vendors had been understanding about the changes.

But with so much uncertainty, the couple had to make a call to reschedule things to next year and hope for the best.

"We hope that's enough time to allow things to settle down a bit. I guess what Nate and I are really worried about is whether they're going to survive the next 12 months."

Minister Clark said there was no way to know how long the ban will need to be in place.

"I think we will likely be in this situation for some time, because we're wanting to act early and act strongly, but we will be reviewing it.

"We are determined to take the precautionary approach we have taken to date because it has served us well."

Many funerals will still be going ahead, though numbers are also restricted to no more than 100 people.

There are funerals booked in at chapels today.

Its chief executive Gavin Murphy said they may need to stop mourners at the door.

"Families that we've spoken to are hugely devastated. I guess we're going to have to just turn people away if there's more than 100.

"And then how do we prioritise the people that do come into the service? How do we decide who misses out?"

Murphy said funeral directors from around the country will meet today to discuss how to manage the changes.

He said embalming means funerals can be delayed for two weeks - and sometimes up to six - if people need to self-isolate.

The restaurant was also seeing less people through the door - with patronage somewhere between 30 and 50 percent of usual turnover.

"We're obviously trying to keep a positive outlook... we're all battling the same storm. We will get through this."

He said a wedding coming up with about 70 guests would need to be carefully considered.

Bain encouraged those toying with going ahead with smaller events to think of vulnerable loved ones.

"You just need to make that tough decision and do what's right for you and your family.

"We're still going to be together, it's just a matter of time of when we can make it more official in terms of a wedding, but life's not going to change for us."

David Clark stresses the importance of social distancing at events that do go ahead, and said "if in doubt, cancel".