Businesses will receive the lion's share of a $12.1 billion economic rescue package as New Zealand responds to the Covid-19 crisis. 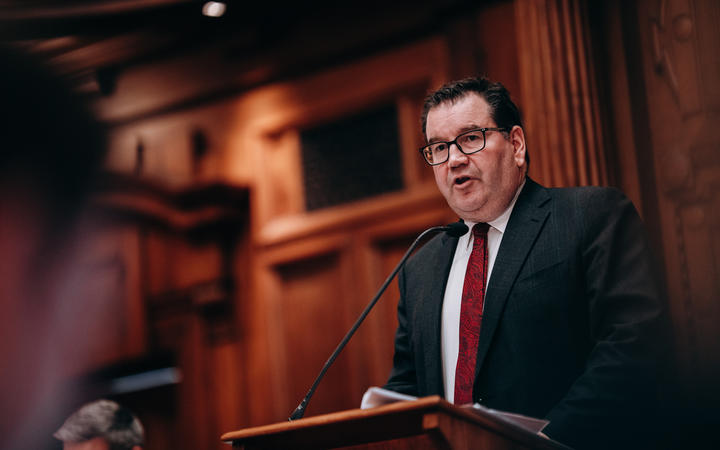 Beneficiaries and superannuitants will also get a cash bonus with a permanent increase to main benefit rates and a one-off doubling of the Winter Energy Payment this year.

The biggest boost is $5.1 billion towards wage subsidies for affected businesses in all sectors and regions, which kicks in today.

Beneficiaries will also get a permanent increase of $25 a week in the hand, and the Winter Energy Payment, which beneficiaries and superannuants receive, will be doubled this year.

Together that will cost $2.8 billion while another $2.8b is being invested in business tax changes to free up cashflow.

That will include a provisional tax threshold life, the reinstatement of building depreciation and writing off interest on the late payment of tax.

Finance Minister Grant Robertson said this package is about "cashflow and confidence'' and is only the beginning of the support that will be rolled out to help New Zealanders through this crisis and to recover from it.

"We will fight this virus. We will cushion the blow for businesses and workers. We will position for recovery. We have been and we will be swift, decisive and compassionate,'' he said.

The package represents 4 percent of GDP and is "more than the total of all three Budgets' new operating spending in this term of Government put together.''

Robertson said latest Treasury forecasts show New Zealand's fiscals will be impacted - there will be higher debt, there will be deficits and unemployment will rise steeply.

"This is the rainy day that we have been planning for,'' he said.

Help for business and beneficiaries

Wage subsidies will be available for businesses in all parts of the country that can show they've had a 30 percent decline in revenue for any month between January and June 2020 compared to the year before.

For eligible businesses, employers will be paid $585.50 per week for full-time staff, and $350 for part-time staff.

A support package estimated to cost $126 million is also being made available for those people unable to work because they're either in quarantine, sick from Covid-19, or caring for family in either of those situations.

These payments will be the same as the wage subsidy amounts but are only available for eight weeks and employers will be expected to meet all of their requirements in terms of sick leave.

An increase of $25 a week for all main benefits starts on 1 April and the Ministry of Social Development estimates about 350,000 low-income families will benefit.

The annual Winter Energy Payment will double to $1400 for couples and $900 for single people.

It will start on 1 May and the rates for this year only will be $40.91 per week for a single person and $63.64 a week for couples or people with dependants.

A dedicated $500 million fund for health was also announced; that includes extra intensive care capacity and equipment for hospitals, support for GPs and primary care and improving video conferencing and telehealth consultations.

The funding will also nearly double resources for Public Health Units to increase the ability to contact trace the virus.

Healthline will also receive a $20 million boost for more staff.

Health Minister David Clark said so far the medical response has been "world-leading''.

"We know we will see more cases of Covid-19 arrive here. So we must plan and prepare for that reality,'' he said.

Support of $100 million has been allocated for the redeployment of workers.

The Covid-19 Cabinet committee will meet tomorrow to agree to the first round of assistance, starting with the Tairawhiti region.

The committee will also discuss new measures to help the aviation sector and to protect supply chains.

This package is estimated to cost $600 million and does not include any support for Air New Zealand.

Instead it's expected to assist the country's largest airports suffering a huge downturn in travel.

Robertson said discussions about how to help Air New Zealand were still underway and he was limited in what he could say about it at the moment.

He said it was still unknown what the full impact will be on New Zealand's economy, "however we do know it will cost us jobs and have a significant impact on business''.

That means there will be some businesses that fall "outside the scope of the proposed business and employee support package".

"Officials have been asked to develop options so the government can support larger businesses that have been materially impacted by Covid-19," he said.

'We will cushion the blow'

He said this was just the initial response, and the government will continue to support people through the turbulent times ahead.

"We will fight the virus, we will cushion the blow for businesses and workers, we will position for recovery, we have been and we will be swift, decisive, and compassionate," he said.

Robertson said he would not sugar coat it - a recession in New Zealand was now almost certain, and will affect every part of the economy for some time.

"We are going to see many New Zealanders lose their jobs and some businesses will fail. We will have an extended period of deficits and our debt as a country will have to substantially increase.

"Clearly there are tough times ahead, I acknowledge the uncertainty and anxiety many people will be feeling right now. I want to say directly to those people, we will get through this together," Robertson said.

Prime Minister Jacinda Ardern said the government went hard on its health response to the coronavirus, and will go just as hard with the assistance it provides.

She said New Zealand has been shaped by its experiences, which have often been tough, harsh and unpredictable.

"That is when New Zealanders are at their best, that is when we rally, when we look after one another, when we care for the most vulnerable.

"My final message is this to New Zealanders, be strong but be kind, we will be okay," Ardern said.

She defended the decision to boost benefit payments, saying that the increase in the Winter Energy Payment was a practical measure to ensure one of the most vulnerable groups stay well over the cold months.

"If you want to stimulate an economy you give extra support to those on the lowest incomes because they have a lower income, they spend it and that is what our economy needs right now," Ardern said.

But National accused the government of getting its priorities wrong in its emergency economic package.

Leader Simon Bridges said the package will be welcomed by beneficiaries, but the job support isn't enough.

"Bluntly, what we see in this package today is money flowing faster into the hands of beneficiaries than the workers and the businesses that will lose their businesses and their jobs over coming weeks and months.

Bridges also heavily criticised the government for only spending half-a-billion dollars of the package on health.

"By the way that doesn't cover the current deficits that are in the DHBs today...it's too little too late".

Bridges said health officials have already made clear the ventilators, the overflow, and testing equipment needed to respond to an outbreak aren't there.