Auckland schools say they're gutted the much-anticipated Polyfest has been cancelled at the last minute. 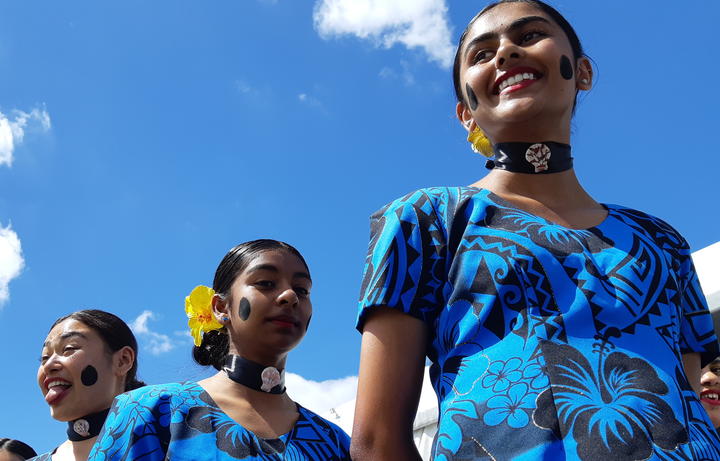 Some are calling for an alternative plan such live-streaming or a small performance night so the students' efforts won't go in vain.

The event was cut short last year following the Christchurch shootings and this time - to limit the risk of a community outbreak of Covid-19.

Auckland Girls' Grammar School has about 500 students who were going to participate in the event. Deputy principal Maree Flannery said the school have groups represented on every cultural stage.

"We're really disappointed because the girls have worked so hard for weeks, and we've just had a concert this afternoon and they are polished and looking amazing but we also absolutely understand that this is what had to happen," she said.

Aorere College teacher and coordinator for its Tongan group, Loketi Toutai, said the students have been practising since February, and every child may have spent at least $80 to $100 for the costumes and fees.

"It's gonna really hit them hard negatively because this is the second year that it has been cancelled - both last minute- both parents and kids have put in a lot of time and money," he said.

Toutai said he'd like a plan B for such a cancellation.

"Even if it's smaller gatherings for schools in different zones of Auckland. Last year when it did get cancelled, we were trying to organise events where we could get other schools to come on board and we have our own little performance night."

"Because there's so much preparation that goes into this and not just in terms of tutoring, but also because kids give up their school time for the schoolwork and also training. Teachers give up time with their families to be here after school. So it's very unfortunate."

She also thought that there should be other plans so the efforts student put into making the costumes were not wasted.

"Whether it is through a live stream or postponing it to a later date where they do eventually get to reap the rewards of what they have worked towards, I think that's something that should really be looked at."

Tuli said the cancellation two years in a row would hinder students' motivation to explore their own culture.

"It's already kind of hard to try and get them to embrace their culture, and I think if there are no other alternatives in place, then maybe they'll feel discouraged to join, because if it was me personally, I wouldn't join again knowing that there isn't another plan in place for all my hard work and effort."

Event organiser Polyfest Trust's chairperson Greg Pierce said they were already struggling financially, and the cancellation means they probably wouldn't be able to run the event next year.

"We don't get significant support guaranteed for the next two years regarding Polyfest. That is a real possibility unfortunately, which would be a tragedy for our students and our communities in Auckland."

Pierce said students were resilient and some schools may meet to perform to acknowledge the efforts that went into the preparation.

The four-day event, scheduled for 18 to 21 March, was said to be the largest Māori and Pacific Islands festival in the world featuring traditional music, dance and speech from Auckland secondary school students.

If it had gone ahead there would have been more than 12,000 students from across Auckland to perform on stage and more than 100,000 attendees.