A New Zealand couple on a trip of a lifetime to Italy are effectively confined to their hotel in Rome on the first day of an unprecedented, nationwide lockdown to curb the spread of Covid-19. 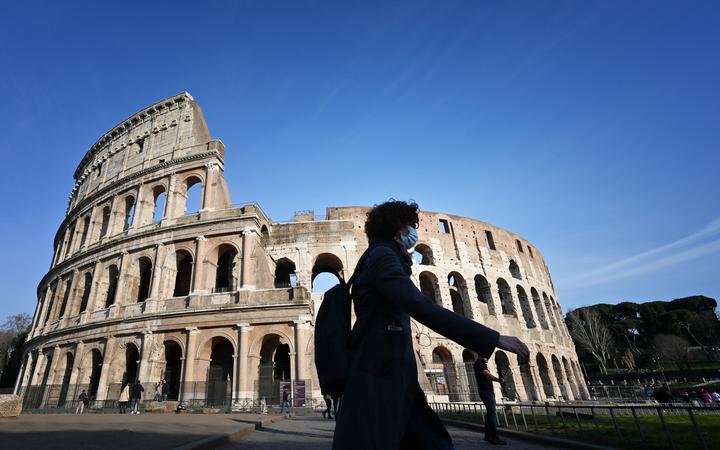 A tourist wearing a respiratory mask as part of precautionary measures against the spread of the new COVID-19 coronavirus, walks past the closed Colisseum monument in Rome. Photo: AFP

The government has told all Italians to stay at home and avoid all non-essential travel until 3 April in a bid to slow Europe's worst outbreak of the coronavirus.

Health authorities said the death toll in Italy jumped to 631, an increase of 36 percent, and the total number of cases rose to 10,149 .

The lockdown limits travel to those with "verifiable work requirements or situations of necessity". All sporting events have been suspended, and schools and universities have been shut until 3 April. Employees have been urged either to work from home or take annual leave.

Hundreds of flights have been cancelled, and streets have emptied and shops and restaurants have closed across the country.

Elinor Harper-Spiller and her partner are in Italy as part of a tour group and have just been told they can only leave their hotel for medical or work reasons.

"It seems fairly indefinite - they're saying until April. We obviously are going to try and get home".

They would be allowed to go to Florence as originally planned, but were told they would be confined to their hotel there too.

"You can move hotel to hotel but not leave the hotel wherever you are."

"Its hard to get information. It really seams that a lot of the government directives are made overnight and just communicated to hotels and museums ... in the morning when they get to work. So it is difficult for us to get information at the moment."

Harper-Spiller said they were talking to their insurance company to try to find out when they can get home.

Joanne Gillespie, a teacher originally from Nelson who has been living in Italy for 20 years, has been working from home in a village north of Rome since schools were closed late last week.

Her teenage children are studying remotely and her husband needs paperwork to travel 20 minutes to his job.

Gillespie's mother was admitted to hospital in New Zealand at the weekend and cannot go to see her.

"I can't even go to the next village without a certificate so I don't think they're going to let me fly home."

"Even here in our little village - we have one shop - and people are just going in one at a time," Gillespie said.

"At the mass on Sunday morning people were sitting some distance from each other ... there was no hand-shaking, no kissing, no touching. We're all experimenting with different types of greetings don't involve being close to people.

"It's hard for Italians not to go in to the double-cheek kiss - that's really difficult.

"My mother-in-law was just saying this morning it's strange for her that she can't just go out to the shop and hang out with her other buddies in the village. It's very strange for the old people at mass.

There's an "apocalyptic film kind of feeling" as more people are realising they do have to stay at home, she said.

Austria announced a ban on people entering the country from Italy unless they carry a medical certificate, in an attempt to stop coronavirus spreading. There will be exceptions, such as for people passing through Austria without stopping and for goods transport.

Austria has had 182 confirmed cases so far and no deaths, compared with more than 9000 cases in Italy and 463 deaths.

Rome landmarks including the Trevi Fountain, the Pantheon and the Spanish Steps were largely empty on Tuesday, while the Vatican closed St Peter's Square and St Peter's Basilica to tourists.

Police told tourists to return to their hotels.

The severe restrictions shocked many small businesses, which fear for their future.

"It looks like an apocalypse has struck, there is no one around," Rome restaurant manager Mario Monfreda told Reuters.

Under the government order, all bars and restaurants will now have to close at 6pm.

"It is a total disaster. This will reduce us to nothing ... more people are going to die as a result of the economic crisis that this lockdown is going to cause than the virus itself."

However, the prosperous northern region of Lombardy, centred on Italy's financial capital Milan, called on the government to introduce even more stringent measures.

"I would shut down all the shops. I would certainly close down public transport and I would seek out all businesses that could be shut without creating excessive damage to the economy," Lombardy Governor Attilio Fontana said.

Crowdfunding platform GoFundMe reports seeing a huge effort from Italians raising money for their local hospitals, the BBC reported. Some €4m have been raised from hundreds of campaigns in 24 hours to help those at the heart of the coronavirus outbreak, it says. The organisation says it is the largest fundraising effort they've seen on GoFundMe in Europe to date.