A South Canterbury town is trying out an on-demand public transport service which aims to takes passengers where they want to go, when they want to get there. 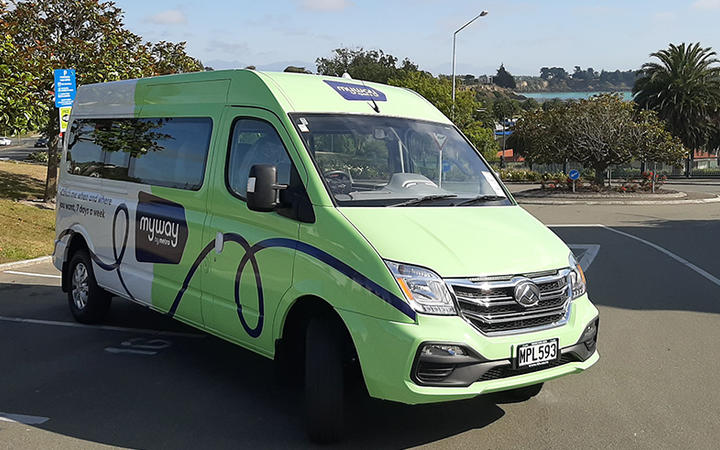 The new system in Timaru is called MyWay and will use mini buses that can carry about 12 people. They would need to be booked in advance either via a smart phone, online, or over a landline.

However instead of following a set route, it will co-ordinate passengers heading in the same direction to pick up people along the way at the nearest main intersection.

In some places existing bus stops will continue to be used, but the new service does not only stop at the formal bus stops.

It also will not pick up people who have not booked if they happen to be at the bus stop when it pulls up.

The Canterbury Regional Council's community transport advisor, Isabelle Bromham, said if it picked up someone who had not booked there could be no guarantee that it would be going where the person needed to go, and any new passengers at that stage would throw out all the other passengers expected drop off times.

John Shane, 86, is a regular bus user in Timaru. He said he accepted that something needed to change with the bus services.

"I came on the bus today, and I was the only one on it. Seems a bit ridiculous, doesn't it?"

He was, however, a bit nervous about the booking system.

"I think it should be all right, but it has got me a bit confused though, having to ring up and ask to be picked up here and taken there. I don't know. I've got a mobile phone but I'm not online or anything like that."

Bromham said they were also looking at making arrangements with some of the larger offices or council buildings, such as the library, to allow for people to make bookings for a return trip on the MyWay service via their reception.

MyWay will cover all of Timaru's urban area, a much wider area than currently available and it will run seven days a week compared to the current Monday to Saturday services.

At the moment, the bus routes do not go to areas such as Washdyke on the outskirts of Timaru, so the change will be a relief for another regular bus user Rowena Manolos.

She said currently if her work was in Washdyke she would need to take a taxi, which was expensive, or walk which was too far.

A limited trial of the new system is currently underway, with 30 staff members from the local and regional councils and 120 volunteers from around the town.

Volunteer Jan Anker was optimistic about the new service, but said her first ride did have a bit of a hiccup.

"Well I was told at the call centre to wait outside my place and I waited and waited and the MyWay bus turned up and I watched it turn down Heaton Street. Luckily, I waved frantically and he waited for me, because he knew me because he was a Ritchies bus driver."

Isabelle Bromham said they were getting feedback from trial participants everyday and making tweaks to the system to get it right.

She said most people in Timaru seemed to accept that there needed to be change and were embracing the new system.

The MyWay system would be trialled over 12 months and a decision would be made after, she said.

"We wouldn't go back to where we are right now. We'd have to review the existing service because everybody is aware that the buses are running empty.

The citywide trial of MyWay will kick off on 21 April, with three of Timaru's four bus routes coming to an end at that point.

The fourth bus route, known as the Link, will continue for now as long as there was demand.

Bromham said their system was unique in that it was replacing an existing fixed bus service.

She said she knew there was great interest in the project from other regions, and hoped it could become a blueprint for other areas.

The Canterbury Regional Council said the maximum project cost is $2.18 million, with the NZTA funding 51 percent of the cost, which will cover the technology, vehicles, operating costs, and community engagement.

That figure also included continuing to run the existing service and a 15 percent contingency.