The Islamic community in New Zealand is on high alert, expecting threats or worse, in the lead up to the anniversary of the Christchurch terror attack.

On Sunday, members of the Al Noor Mosque were the subject of a reported terror threat, which is being investigated by police.

Stuff is reporting the threat, and a photo of a man in a balaclava outside the mosque, were sent to about 2000 people on an encrypted messaging app called Telegram.

Canterbury district commander Superintendent John Price said he's unaware when the photo was taken and establishing that is one of the details of the investigation.

"Part of it is establishing what the content and the context of that photo is - and that's part of our investigation as we try to establish who put it up, what their motive was, what their intent was. That informs a big part of what we're trying to investigate at the moment."

He said the photo came to police attention early yesterday morning when a member of the public notified them of it.

"It's fantastic that we've got members of the public taking responsibility for this type of behaviour in our community, so I applaud that person and I ask that others do exactly the same."

Price said they had strong leads on who the person is and will be looking to track them down and interview them.

"We are very close, I'm confident we'll get to this. But, it's the wider context of what this stands for and what ideologies are out there that is a concern for us, as it is an absolute concern for the rest of the community.

"No one has the right to cause harm or make threats to other individuals or groups. It's just not the way we do things in New Zealand."

Price said police are still operating at medium threat level and won't have officers stationed with guns outside the mosque.

"As we move towards the 15th of March, we will be providing reassurance to our communities - especially our Muslim community."

It comes almost a year after 51 people were killed and dozens more were injured in a terror attack on the Al Noor and Linwood mosques.

Islamic Women's Council national co-ordinator Anjum Rahman said the threat was the fourth she was aware of since the attacks. 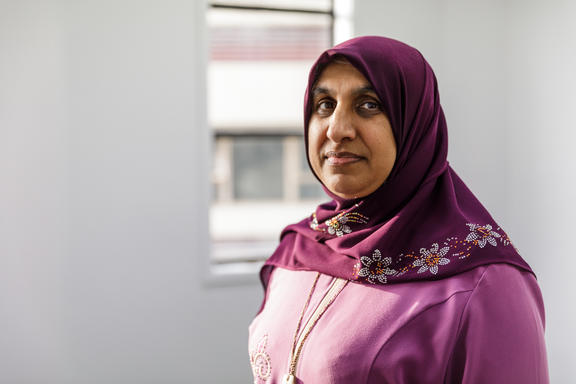 "We have been talking to authorities for some months, since last year, definitely, about preparations coming into 15 March," Rahman said.

"Absolutely, we were expecting this and possibly worse things."

Rahman said racist and xenophobic extremists were emboldened by the 15 March attack.

"There were two things that happened after the mosque attacks," she said.

"The first was that huge outpouring of solidarity and support, but the other thing that happened at the same time was that people that were that way inclined felt emboldened and strengthened and more connected.

"The negative and hateful commentary online has not stopped, and I believe it influences the way these people think."

Rahman said there may be a sense of complacency that had set in since the attack, with New Zealanders thinking the country had changed.

But she said there were still serious issues and changes that were needed.

She said the current political environment meant that people "who aren't the targets of these kinds of threats have a louder voice than those who are vulnerable to them".