Members of a campaign group have donned togs and taken their towels to Parliament to demand the government keep its election promise to clean up waterways. 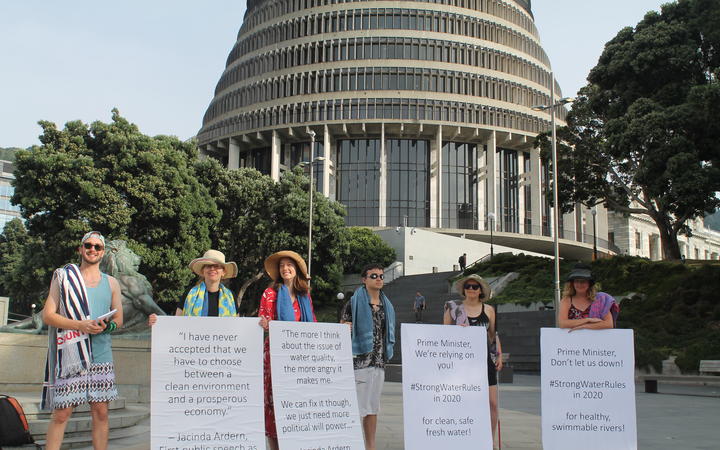 The Choose Clean Water campaigners gathered outside Parliament this morning to call for tightened freshwater standards in line with Labour's 2017 promise.

Their protest comes ahead of the release of the finalised freshwater policy, which the group says the policy should contain meaningful bottom lines for pollution, higher swimming standards, and a cap on nitrogen fertiliser to rein in high polluters.

"The pollution of water has gone too far and we need strong water rules to put us on the path to cleaning up."

The group, founded by students, said the gathering outside the Beehive would be just one of several actions designed to hold the government to account over the issue.

Choose Clean Water's James McNally said, "We all love swimming in our rivers, fishing, and collecting food from waterways.

"We need strong water rules to keep people safe and happy when they're at their local river as well as to protect drinking water sources for a healthy, secure future."

McNally said he hadn't seen strong evidence the government was on track to fulfil Labour's manifesto promise of restoring rivers and lakes to a "truly swimmable state within a generation".

In a statement, the Ministry for the Environment said the government intended to introduce a revised National Policy Statement on freshwater management and environmental standards.

"The specific details of the new regulations are currently being finalised," a spokesperson said.

"The government expects to make decisions on the final shape of the new freshwater regulations in the first half of this year. We expect some regulations will be in force by mid-year.

"The government's objectives are to stop the degradation of New Zealand's waterways so that water quality is materially improving within five years, and to restore waterways to a healthy state within a generation."