The confirmation of the first case of the Covid-19 coronavirus in the country means New Zealand is moving into the next phase of the pandemic response, an Otago University professor says.

Yesterday, testing confirmed New Zealand's first case of the Covid-19 coronavirus - a person in their 60s, a citizen who had recently travelled back from Iran.

Professor Michael Baker said New Zealand was now moving into the containment or "stamp it out" phase.

Director-General of Health Ashley Bloomfield said the risk of widespread infection was low at this point.

Three of the patient's family members were in isolation, and others on the flight would be contacted, he said.

"The people who the public health service will be contacting are the people who were in the same row as this individual or the two rows ahead or behind."

He said they would be required to self-isolate for 14 days and that self-isolation would be under regular communication with the public health units.

"For example, we actually did research in 2009 with influenza, which was behaving very similarly ... and we found the only transmission on [a flight into New Zealand] was within two rows of the affected person. And other people found the same thing. So this is evidence based public health."

The two negative tests for the coronavirus before the third positive test showed the importance of clinical judgment, he said.

"They're obviously very alert clinicians to this sort of possibility and they looked at the whole picture and they did more extensive testing.

"We hope that other clinicians - when they see cases [when a] result doesn't fit the clinical picture - will persist. And I think that's real credit to them". 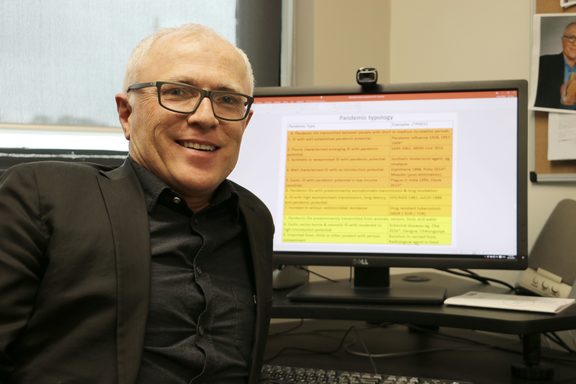 Baker said a bigger problem than someone with the coronavirus returning a negative result was someone who had it but showed very few symptoms.

"So they don't even see a doctor but they are infectious. And we know that the majority of people who are infected with this virus will have very mild symptoms. So that is a big problem in terms of containment."

For those concerned about the positive result, Baker said: "For the moment, it's really just business as usual across New Zealand. We're not looking at community transmission at all, as I think, has been pointed out.

"And that situation could well continue for weeks ahead. But at a certain point, it's going to become increasingly difficult to prevent widespread transmission in New Zealand as it is across the whole globe.

"Hopefully, we can delay that as long as possible. And we have to use this time for maximum preparation. And there are a whole lot of things that we can do and New Zealand is very fortunate to have the resources to have a very highly coordinated public health system and excellent health services."