The first redevelopment of Christchurch's residential red zone has been completed with the opening today of the Avon Loop pathway. 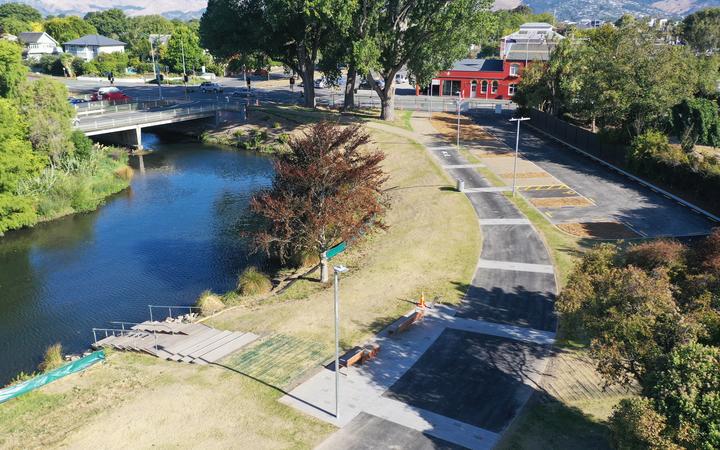 The upgrade of the Avon Loop. Photo: Ōtākaro / Supplied

Nine years after the earthquakes forced residents in one of the city's oldest neighbourhoods to abandon their homes, new life has been breathed in to the area.

The redevelopment includes a $2 million promenade included a walking and cycling track with new lighting, boardwalks along the Avon River and a kayak launching ramp.

Long-time resident Cilla Clements managed to stay in her home, but said she had seen two-thirds of her neighbours leave.

"I saw this video about a volcano in Hawaii and this husband and wife stood there and said, under that lava is our home. I understand now. It's when all of a sudden you actually think to yourself 'you know what, I may not be able to live here' that you suddenly realise where home is."

Those forced to move still visited the area, she said.

"One of the ways of helping them heal is being able to actually come back and visit where they used to be. We're sitting here, here's the river. We're here in an environment that is healing."

Steve Muir raised four children in the area right through the disruption of the earthquakes and said the past few years had been tough.

"Just the big transition, so, lots of people moving away and feeling like suddenly 'you know, all the people I used to connect with are not there anymore', so having to make new connections has been hard.

"Just the whole sort of concern over you know, are we going to get demolished or what's happening, the stress of rebuilding, having to move out while the house gets repaired."

The pathway represented the end of work redeveloping the banks of the Avon River where it meanders through the central city.

Muir said this would make the Avon Loop section the gateway to the central city for walkers and cyclists.

"Having spaces like this where people can come and mingle and build that sense of community, I think it's really essential for a healthy functioning city. So this is going to be a fantastic part of that and I can see, you know, hundreds of people coming here every day to use the boat ramp and feed the ducks and just stroll around and enjoy the area."

Clements was part of a group that saved dozens of daffodil bulbs on the riverbank when the landscaping of the area began late last year.

These were originally planted by former resident Ross Edgar and would be replanted, ready to brighten the area when spring arrived again.

"He was what we would probably call a guerrilla gardener. He passed away at the end of that year of the earthquakes. So we wanted to remember his contribution to this area. So it was important to us that was retained."

There's been no decision yet about what happens to the land the red-zoned homes used to sit on.

Another long-time resident, Sandra Gover, would like to see an orchard planted.

"Already there's an urban foraging site, which shows you where the key trees are, fruit trees and that sort of thing. And that's one of the things that draws former residents back is they know that in this garden there was a beautiful fig tree and they can find it."

Work in the loop had not finished yet however, with rebuild agency Ōtākaro planned to plant 17,000 trees and plants along the pathway this winter as Christchurch continues to heal the wounds left by the earthquakes.