Police have shot and killed a man outside the Westin Hotel on Mary Street in central Brisbane. 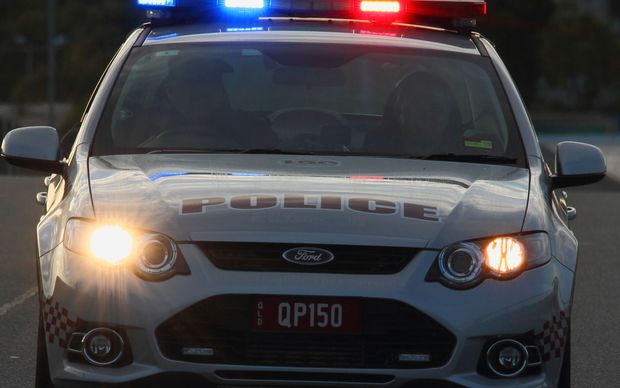 It is understood the man was in a car and wielding a knife when the shooting happened about 10am local time.

Police confirmed one man died and a second person was taken to hospital.

In a statement, they said officers were responding to reports a man armed with a knife had stabbed another man.

"It will be alleged the man charged at officers and was critically injured when police returned fire," the police statement said.

The man was pronounced dead at the scene.

A 26-year-old man has been transported to hospital with facial and back injuries.

Moments before the shooting, a nearby driver captured footage of officers pointing their weapons at a car with its door open.

Witnesses told the ABC they saw a man with a knife threatening people.

One witness said police asked the man several times to put down the knife and when he failed to comply, they shot him.

Nearby residents said they ran for their lives as the shots were fired.

Taxi driver Rubal Singh was metres away when the shooting unfolded and captured video on his mobile phone of police confronting the man.

"I couldn't see anyone threatening but all I could see was the cops jump out of the car and start shooting," he said.

"At least 10 rounds [were] fired and I witnessed it with my own eyes, like 10 feet away from the car.

Cops started shooting the guy and I then saw one of the cops kicked away the knife on the ground.

"It was horrendous. I was about to finish my shift and it was shocking to see such an incident happen in front of you.

Adam Leishman, who lives in an apartment above the Westin Hotel, said he was nearby and heard the shots fired.

"All of us in there just heard the shots and started running really quick … it was a lot of shots," he said.

"Me and about 20 others were in the alleyway and we had no idea who was behind the gun.

"We moved pretty quickly when we heard the shots.

"It is comforting to know if there are going to be shots fired in Brisbane it is in the hands of a policeman and not someone who shouldn't have a gun."