University students are demanding the government lift the Covid-19 travel ban, saying it is unreasonable, unempathetic and feeds racism. 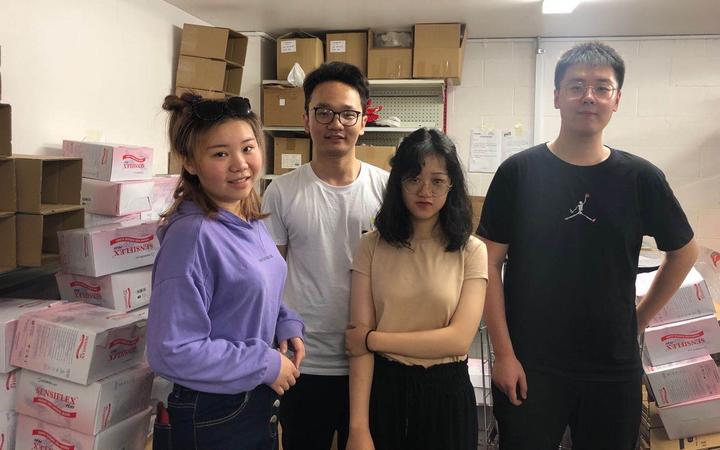 University of Auckland students Summer Xia, Allan Sun, Rong Kuang and Hengda Qin are also members of the New Zealand Chinese Students Association. They are helping students stranded in China to communicate with their education providers. They're also organising donations to help China fight the Covid-19 outbreak. Behind them are boxes of surgical gloves. Photo: Supplied / Summer Xia

The Union of Students' Associations has published an open letter to the Prime Minister, Health Minister and Education Minister, protesting the restrictions which bar foreign travellers arriving from mainland China.

Prime Minister Jacinda Ardern confirmed yesterday the ban would be extended for a further eight days.

Officials are in talks with universities about a possible exemption for international students.

In the letter published online NZUSA president Isabella Lenihan-Ikin said students wanted the ban scrapped altogether, with an exemption only the "minimum" response.

"While we recognise the need to prioritise public health and safety, this travel ban is an unreasonable and unempathetic response," she said.

"It fails to consider the impact on international students and staff travelling from or through China, in light of minimal public health risk."

The restrictions were at odds with World Health Organisation advice and had fed racism and xenophobia, Lenihan-Ikin said.

"The ban has fuelled hysteria that coronavirus is a "Chinese" disease, and is responsible for spreading xenophobic and anti-Chinese sentiments within the Asian community.

"It has uncovered deeply rooted racism, including in the form of questions such as 'Where are you from? Oh, not China? No coronavirus then'."

She also raised concerns about the financial loss to the tertiary education sector, warning that it would led to courses being axed and staff losing their jobs.

"This will undermine the student experience that all students (domestic and international) pay thousands of dollars for each year."

The letter also set out several "urgent" requests for the government to support tertiary insitutions to:

The tourism sector estimates New Zealand is missing out on up to $50m a week due to the ban.

The government announced last week an $11m boost to Tourism New Zealand to help attract tourists from other countries.

Finance Minister Grant Robertson and the Tourism Minister Kelvin Davis were set to meet tourism bosses and airport chiefs in the Beehive this evening to discuss how best to cope and plan the best use for the promised funding.

The on-going closure of New Zealand's immigration office in China because of coronavirus has also left more than 13,000 visa applicants waiting for a decision.

Stock markets around the world have dived over fears about the virus, including in New Zealand.

At a news conference this afternoon, director general of health Ashley Bloomfield said more than 5000 people had registered with Healthline as being in self-isolation in New Zealand.

Dr Bloomfield said a total 121 people had been tested for the virus in New Zealand to date, but there were no official or suspected cases.

He said the six New Zealanders in quarantine after returning from the Diamond Princess cruise ship in Japan were doing fine.