Water use in parts of Northland might be restricted to essential-use-only "in the very near future" due to the region's unrelenting drought. 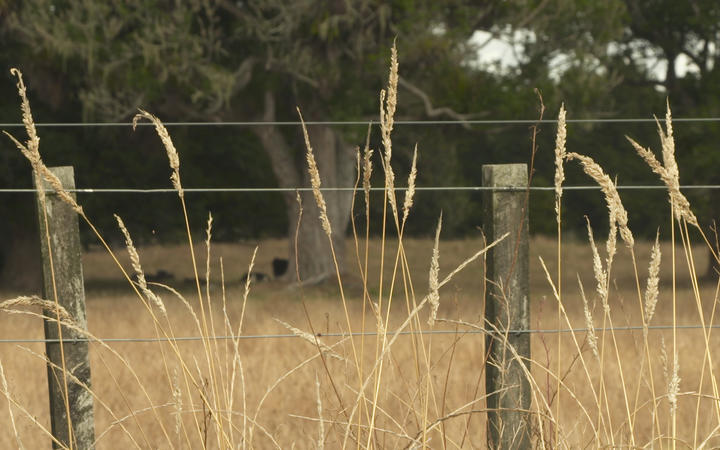 Paddocks near Kaikohe dry and in under pressure from the Northland drought. Photo: RNZ / Simon Rogers

Water and Waste Manager Ali McHugh said that meant water can only be used for "reasonable" household domestic needs and stock welfare needs.

"More than two dozen aquifers are nearing, or quickly heading toward, their lowest groundwater levels on record and this could cause problems for many of our small coastal communities," she said.

"For those drawing water from bores in these areas, this means if they have not already, they may soon begin experiencing issues such as water becoming noticeably salty and other bore behaviour they have not encountered before."

McHugh expected the small, shallow coastal groundwater systems will drop to significantly lower levels than would normally be seen during the next two to three months, bringing the real risk of saltwater, or saline, intrusion into freshwater systems.

"There is a real risk that there will be water that's unsuitable for drinking - or even no water at all - as shallow bores become unable to pump water and deeper bores are impacted by saltwater moving inland," she said.

If too much saltwater intrusion occurred, it could take many months for things to improve to a point where a bore water supply could be used again.

McHugh urged people to save all the water they can if they are not already doing so and if possible, reduce pumping rates further.

"In these conditions, it's best to pump slowly from a groundwater system into a tank, which allows more recovery time for the aquifer and acts as a buffer if any issues arise with the bore."

However, she said it was important to remember that during drought conditions most groundwater users were just as much at the mercy of the lack of rain as those relying on surface (stream, water and lake) supplies.

She said predicted low groundwater levels had been driven by the very large rainfall deficit the region had experienced in the past 18 months, with rivers now below drought flows at nine of the council's flow monitoring stations.

The anticipated 14-day water shortage directions will restrict water use to "reasonable household domestic needs and stock welfare needs" - meaning water will not be able to be taken for irrigation, garden watering (other than with recycled domestic water from laundries, kitchen and bathrooms) car washing, water blasting and filling swimming and spa pools during the term of the directions, which can be extended as required.

"We will be monitoring water use; and those found using non-essential water such as for swimming pools, washing boats, and irrigation, may find themselves facing enforcement action for breaching the water shortage directions," she said.

The council recently issued a water shortage direction for the whole of the Awanui River catchment and has been issuing general advice about the dry weather, minimal rainfall and dwindling groundwater for months.

McHugh said people who had a critical need to take water and were unclear about whether they can do so under a water shortage direction should contact the regional council on freephone (0800) 002 004.