The NZ designers of the top Jacinda Ardern wore for the cover story on Time magazine are "thrilled" the prime minister chose something made almost three years ago. 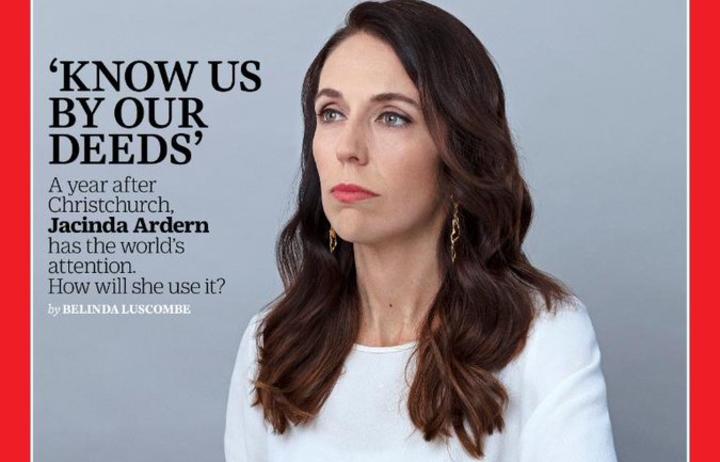 The round-necked silk top by Ingrid Starnes was made just before a debate in the 2017 election campaign.

Co-founder and managing director Simon Pound said the design firm made Ardern a suit for the debate and on the afternoon "whipped up" the Mio white silk shirt to go with it.

Pound told First Up Ardern is a big supporter of New Zealand fashion labels and wears a range of designers' pieces on big media occasions to showcase the local industry.

But it was a "total surprise" to see Ardern wearing the top on the magazine cover.

"That was nearly three years ago that the top was made. It's quite a rare thing to have someone have a cover of such a big magazine and just kind of get something from their wardrobe.

"It's a big day for a little New Zealand-made thing, to see the top there," he said.

"That's the kind of sustainability that we really believe in ... the idea of buying once, buying well, looking after things and getting a lot of wear of them and not being disposable fashion.

For the firm's 10th year in business, they're thinking of holding a function and asking people to wear their oldest piece, he said.

"We really love to see pieces from years ago being worn again." The company will repair seams or replace buttons on clothes made years ago.

"We've had thousands of comments and likes across ... social media . People seem to really love the fact that for such a big day you'd pull something out of your wardrobe that's two-and-a -half years old."

Ardern features on the 2 March edition ahead of the anniversary of the Christchurch mosque attacks. The cover of the magazine's international edition carries the headline 'Know us by our deeds' - a quote from a speech to the Big Gay Out in Auckland. The subheading reads "A year after Christchurch, Jacinda Ardern has the world's attention. How will she use it?".

In the profile, Belinda Luscombe writes that Ardern's real gift is her ability to articulate a form of leadership that embodies strength and sanity, while also pushing an agenda of compassion. 'Now her challenge is to prove this new style of leadership can get meaningful results, ahead of general elections in September," Luscombe writes.