Tears flowed as the film maker being sued by Sir Robert Jones talked about how denigrated she felt by his column which suggested Māori should be grateful to Pākehā for existing. 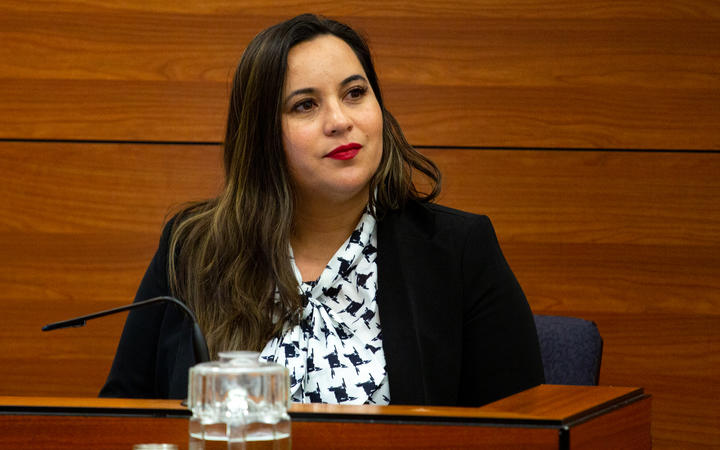 Renae Maihi in cour. It relates to a petition by film maker Renae Maihi, who called for Sir Robert's knighthood to be revoked after he said that Waitangi Day should be replaced with Māori Gratitude day in an NBR column in 2018. Photo: RNZ/ Meriana Johnsen

Renae Maihi has taken the witness stand on day four of the trial, to defend a petition where she called for Sir Robert's knighthood to be revoked, and according to the counsel for Sir Robert, defamed him by calling him a racist, and saying he is an author of hate speech.

In the column - which was removed from the NBR website days after it was published due to "inappropriate content" - Sir Robert says Māori should bring Pākehā breakfast in bed, out of gratefulness for existing, and that not a single Maori would have been alive today if it wasn't for "Brits".

Maihi was overcome with emotion when telling the Wellington High Court how she felt reading Sir Robert's column.

"It identified my entire race and suggested they should become servants for a day for Pākehā."

Maihi said, while she accepted that Sir Robert didn't literally expect Māori to bring Pākehā breakfast in bed, it still upset and angered her.

"The idea that someone would ridicule, belittle, disrespect and denigrate my son, my ancestors, my friends, my whānau, my people is unacceptable to me."

She detailed multiple instances where she'd experienced racism, including being "terrorised" by her mother's Pākehā partner, who cut the strings on her guitar because she was playing a Māori song, and being racially taunted at school when she was 10.

Maihi said Sir Robert "does not have the mana befitting a knighthood".

He said Maihi does not accept her petition damaged Sir Robert's reputation, because it is already generally bad, based on his publicly expressed views on Māori and other ethnic groups.

"It is clear in the light of day, applying 2020 norms and even before we come to expert evidence on the nuances and precise limits and delineations of racism and hate-speech, that what was said by Sir Robert in the early days, could not probably be said now without immediately being described as racist."

The courtroom was packed yet again, with the judge having to stop proceedings on more than one occasion so more seats could be found for members of the public.

After court was adjourned for the day, Maihi was given a round of applause from people in the public gallery and a wahine stood and sung a waiata to Maihi.

The cross-examination of Maihi will continue tomorrow.

Lawyer and Treaty of Waitangi expert Dr Moana Jackson is expected to take the stand to discuss racism and hate-speech later in the trial.