Sir Robert Jones has admitted he has never read the petition calling for his knighthood to be revoked that he claims defamed him. 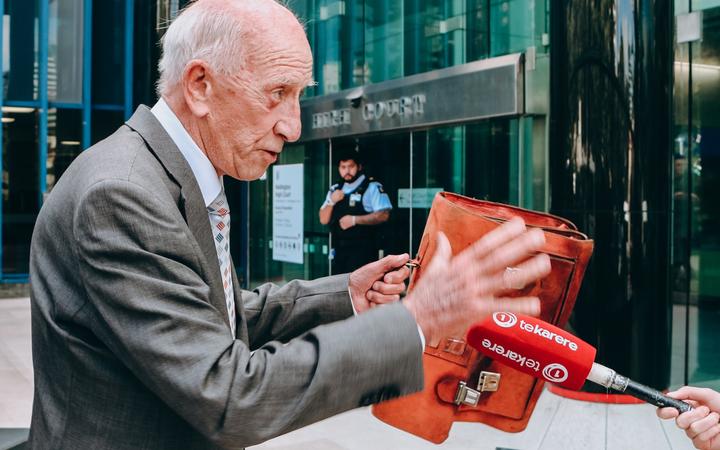 The petition, which has garnered more than 88,000 signatures, was started by filmmaker Renae Maihi, following a column published in NBR in 2018 by Sir Robert.

In it, he calls for Waitangi Day to be replaced with Māori Gratitude Day, where Māori bring Pākehā breakfast in bed out of gratefulness for existing.

Sir Robert was all set to take the witness stand for cross-examination today when he realised he'd forgotten his hearing aid, causing an hour long adjournment.

It couldn't be located, but once another hearing device was found, the cross-examination of Sir Robert could finally get underway again.

Sir Robert was questioned by Maihi's lawyer Davey Salmon as to whether he had read the petition in full.

"I formed the view that her motives were dishonest... I don't have to read what she wrote."

Sir Robert also claimed in the NBR column that there are no full-blooded Māori left, and that if it had not been for "Brits", Māori would no longer exist.

When questioned by Salmon as to whether he knew that the notion of blood-quantum was "deeply controversial", Sir Robert said no.

"It's ridiculous, I've never suggested that, blood knows no racial division - Māori blood is the same as our blood, we're talking about ancestry."

It was at that point - and not for the first time - that Justice Thomas had to stop Sir Robert and tell him "unless you want me to do this every five minutes, can you please just listen to the questions, and answer the questions".

An expert witness for the defence is expected to take the stand to discuss the notion of blood quantum later in the trial.

Sir Robert accepted that "what's upsetting for one person, might not be for another" when it was put to him by Salmon, but dismissed the possibility that Maihi may be upset at his views on race and Treaty issues.

"How much do we tolerate of ridiculous offence-taking," Sir Robert said.

Outside the courthouse, 81-year-old Ken Finlay, from Ngāti Kahungunu, was protesting against Sir Robert.

"I've got grandchildren who are Māori and I want them to live in a country that they can feel comfortable in."

The author of Once We Were Warriors, Allan Duff, and Emeritus Professor of Political Science, and International Relations Dame Margaret Clark are expected to take the witness stand for the plantiff, Sir Robert, later this week.