In a speech to Wellington's Chamber of Commerce, National Party transport spokesperson Chris Bishop said the party would look at "reworking" the $6.4 billion Let's Get Wellington Moving project. 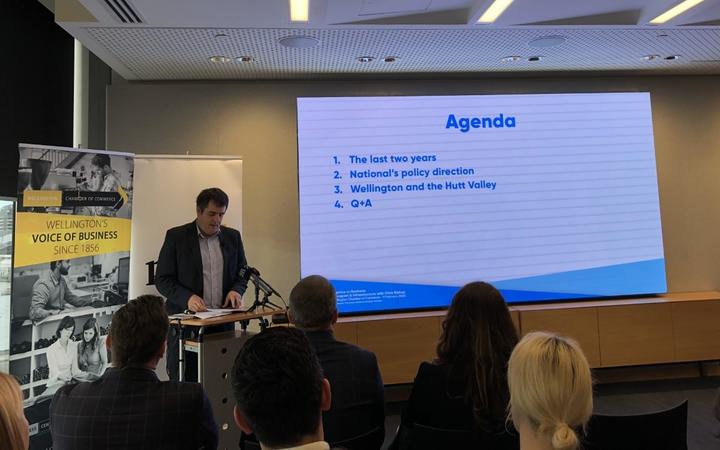 The Hutt South MP said they would "sit down with the various players, and reshape it and rework it, and it'll be a better package for Wellington.

"It means there will be a re-look at sequencing as well."

In particular, the sequencing would bring the second Mount Victoria tunnel forward, something Bishop said was crucially important.

"The officials said you need to get on with it straight away, by 2024.

"It's needed for better walking, cycling, it's needed for buses, you need it to reduce travel times to the East, it's just inexplicable that the government hasn't done it.

"Let's be very clear: we think it's ridiculous that in New Zealand's capital city in the 21st Century, we are still using a two-lane tunnel to the airport built in 1931."

Transport Minister Phil Twyford said going back to the original proposal would just mean further delays to work getting started.

"Even the mayors of the Wellington region are not asking to renegotiate the priorities in the LGWM programme," he said.

"If the National Party want to renegotiate [LGWM], what they're promising to do is set back this process years and years, and take Wellington back to a 1950s transport policy simply built around motorways and building more roads."

Bishop's speech also offered a glimpse into what National's transport infrastructure policy would look like in the upcoming election.

He said a National government's spending would be "bigger and better" than Labour's, with investment going into State Highway projects, as well as improving public transport across the country.

"We're going to take a significant, credible and costed transport package to the election, that we intend to release soon," he said.

Bishop did not detail projects would be invested in, nor how much would be spent, he said there will be three characteristics that would define the policy.

Twyford said the government had already done more in two years in Wellington than National did in nine in the previous administration.

"Look at their track record - in nine years, they achieved nothing to improve Wellington's transport system, except a failed attempt to force a massive concrete flyover at the Basin Reserve that nobody wanted.

"In two years, what did we achieve? A $6.5 billion multi-modal transport programme for Wellington."

National has "won the argument over roads" - Bishop

Roads were a big winner in last week's Infrastructure Fund, which set aside $6.8 billion to improve transport, mainly directed towards road and rail.

At the time, Prime Minister Jacinda Ardern said when National was in government, they had "announced a number of projects, but never funded them.

"This coalition government is committing and getting the job done."

Bishop accused the government of copying their 2017 Roads of National Significance Project, and said the government had delayed the projects for two years when they "could and should have been getting on with projects right now".

He said the funding towards roads showed National had "won the political argument over roads. We need them, we need more high-quality four lane expressways".

"The key question for New Zealanders this year will be: who do you actually trust to get on and build these roads?"

While there were no concrete policy declarations, Bishop said National was considering bringing all vehicles - including EVs - under the Road User Charge, as well as introducing congestion charging, something Wellington City mayor Andy Foster had expressed support for.