A new movie museum and prioritising a second Mt Victoria tunnel are firmly on the agenda for Wellington's new mayor. 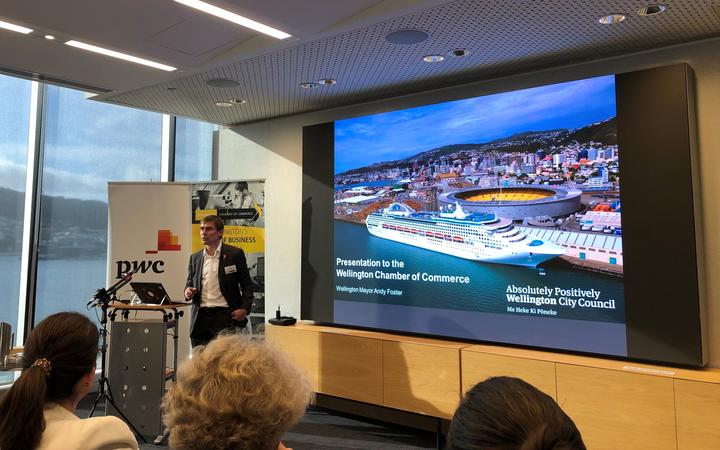 Wellington Mayor Andy Foster outlines his vision for the capital over the next three years; Photo: RNZ / Harry Lock

In a speech this morning to the Chamber of Commerce, Mayor Andy Foster outlined his vision for the city over the next three years.

He said coping with the demands of a growing city would be challenging, but there were opportunities to reap the benefits from it.

The challenges were many, he said, from accommodating a growing population, to alleviating housing shortages. With upcoming building projects like the convention centre, as well as earthquake-proofing buildings, he said it would not be a cheap exercise.

Such planning will cost money for the ratepayer, with rates projected to increase by more than 50 percent by 2028.

Mr Foster however, was still excited about other possibilities, such as a movie museum.

"I am quietly hopeful that we might end up with a movie museum in due course," Mr Foster said. "And that will be a fantastic thing for Wellington.

Such an idea has a long history, with Sir Peter Jackson initially getting onboard to create one on Shelly Bay. When that fell through, there were new plans to attach a museum to the Convention Centre, but again, that did not proceed, in what Mr Foster called a "crying shame."

When Mr Foster was asked where he planned to place the museum, he said all would be revealed in due course.

Other details, such as how this would be paid for, and whether there would be any partnerships, were not given.

The capital city's grand infrastructure plans could also be subject to a reworking, with Mr Foster keen to prioritise a second Mt Victoria tunnel, over mass rapid transit.

Under the current plans, the tunnel would be completed in more than a decade - too long for the mayor's liking.

Such a time period was also too long for National List MP Nicola Willis, who was in attendance at the speech. When she asked whether he would try to renegotiate with the government, he answered he "would try".

"I haven't had direct communication from him [Transport Minister Phil Twyford], but there is some indication of [him] being open to conversation."

He said he was concerned about some of the writing in the documents around Let's Get Wellington Moving (LGWM), which make it appear as if the plans are set in stone.

"You read something in one document, it might have a different implication in a different document.

"Some of the documents seem to suggest that everything is signed, sealed [and] delivered. I think we're a fair way from that."

Mr Foster added he had more issues about how this would be paid for.

The council's 2018-2028 Long Term Plan predicted financial headwinds, including several major projects like the library closure. But it did not include Let's Get Wellington Moving, nor the reworking of Civic Square.

As such, the project would add 20 percent to rates bills on top of the 52 percent, and so Mr Foster wanted to explore the issue of introducing a congestion charge, something that has been ruled out at the Beehive.

He said he wanted to see more trust placed in local government with such matters.

"Ratepayers simply won't be able to afford it. Do you want these things to happen or don't you want them to happen? You've got to give us the tools.

"At the moment, central government straitjackets local government and makes it very, very hard to do our job."

Notable by its emission was a comment on the future of Shelly Bay. While its resource consent was granted just a month ago, Mr Foster has been a vocal opponent of the development in the past.

There were other issues instead that Mr Foster said he wanted to look at:

But Mr Foster said not everything would be possible: decisions, and sacrifices would have to be made.