Vendors at Wellington's Underground Market say they are devastated, after it was announced the market will be closing on 14 March. Wellington Issues Reporter Harry Lock went along this morning to speak to some of the business owners affected. 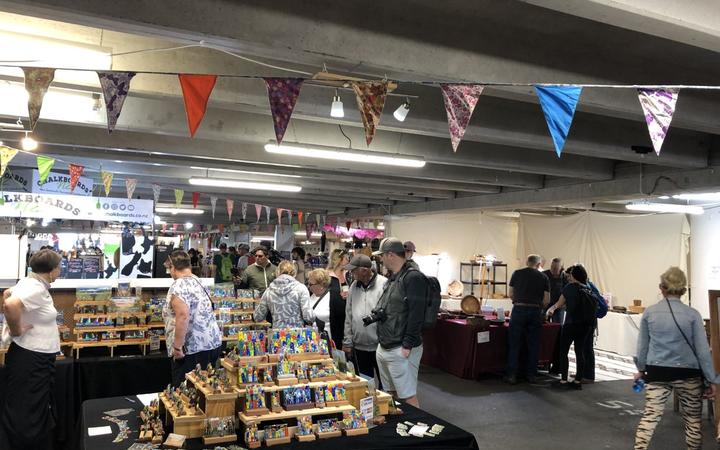 Around 80 businesses set up shop every week in the waterfront building, but they have been told 14 March will be their final trading date.

An assessment has shown the building which houses the market, Frank Kitts car park, is earthquake prone.

At the first market since the decision was made last Sunday to close down, for the shoppers it seemed business as usual. But the impending closure means uncertainty for the businesses who rely on the market as their main source of trade.

It is not only gutting for the business owners, it has also been a blow for the founders of the market.

"It's something that's hit us hard, it's hit everyone hard," co-founder Helena Tobin said. "We're just down here today, talking to our beautiful market whānau - they're all really affected by it."

Christina Bonallack, who runs a glass art stall, has been trading at the market since the beginning.

"Essentially, the underground market is my best earner, by a long long way," she said.

"I heard [about the closure] last Sunday by email, and I was a little bit devastated, and so was my husband - he does all my stands and he's my support act. He's still got a day job, but I don't.

"So I'm sure when one door closes, another one opens, and all that trite stuff. But I love the market, they've done a brilliant job over the past 10 years, and hopefully we can find a venue that will suit us and we can keep going."

A business incubator for local start-ups

The Wellington Underground Market celebrated its tenth anniversary last December - it has become a major attraction for Wellington's waterfront, with stalls selling everything from jam to jewellery.

Founders Wendy Jasper and Helena Tobin said it has come a long way since the first market - December 2009 - where there were just 25 stalls.

"The first winter was ... it was growing," Jasper said. "It was like anything, when a business starts off it's quiet. I think 106 has been our largest number of stalls."

Tobin said they have prided themselves on seeing businesses flourish.

"We see ourselves as a business incubator," she said. "For us, it's about helping these emerging businesses onto bigger things.

"We've always said it's an unusual business model, because our sign of success is when people graduate and leave us and go off to full-time retail or exporting their stuff."

While many businesses have come through the car park doors and moved on, around 15 have stuck around since the beginning.

"We have about 60 percent of our peak business going on here," Ross Baker said, "customers coming in to repeat buy."

"We will be forced to go online, which means we lose a little bit of contact, which the public wants. Colours, fashions, that type of thing."

The future of their work is now up in the air, he said. While he has a day job, Julie Baker spends Monday to Friday producing the garments.

"This is Julie's job, so she's potentially going to lose her job if we can't make it work online. It's pretty sad - it's sad for a lot of people round here."

Looking for an alternative venue

Wellington Mayor Andy Foster said on Tuesday he would be helping the market look for an alternative venue, and asked for property owners to come forward who think they would be able to accommodate the market.

Wendy Jasper said they are looking at moving as a way to "reinvent the market."

"We've come through the grief and we're really determined to make it work another way."