A five-month long Police and Customs operation has ended with the jailing of four foreign nationals and the dismantling of a trans-national crime syndicate. 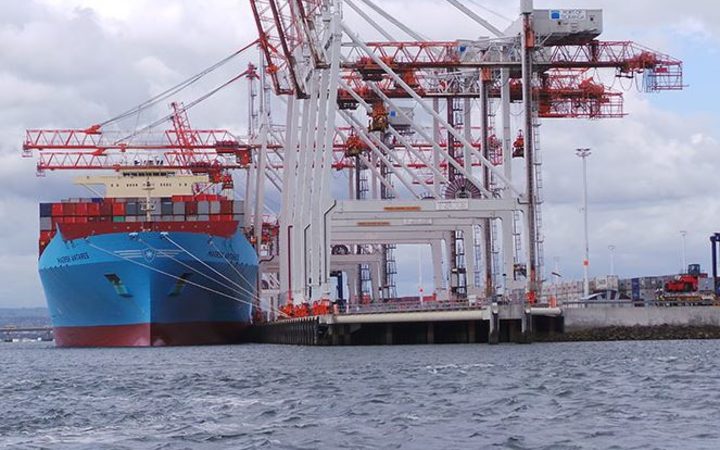 The Maersk Antares at the Bridge Marina Pier A in Tauranga. Photo: Andrew Campbell.

The men were arrested in Tauranga in late October 2017 after being involved in a sophisticated operation smuggling in cocaine with a street value at the time of $20m.

They faced various charges of participating in an organised criminal group, importing cocaine and money laundering.

Justice Powell outlined how the men were involved with an international drug syndicate that took advantage of a special design feature in the hull of Maersk container ships.

''These ships possessed a small compartment immediately forward of the rudder in which the cocaine could be placed and then retrieved from outside without the knowledge of the crew. Using this method cocaine obtained in South America and placed aboard the ship could be retrieved after the ship berthed in Tauranga.''

Justice Powell said the four men were involved in extensive preparations for the ship's arrival, including chartering a power boat, called the Boston.

''The Boston made its way towards the Maersk Antares and stopped near the rear of the ship. Mr Habulin, wearing a wet-suit got into the water, swam to the ship and climbed on board to locate and extract the cocaine.''

Unknown to Police and Customs were on to them and they were arrested the next day.

Customs investigations manager Bruce Berry said the operation showed the level of sophistication used by some international syndicates and the joint capabilities of law enforcement agencies to combat them.

Justice Powell described the offending as large-scale, highly commercial, extremely well-planned and relatively sophisticated, particularly through the use of the ship, Maersk Antares.

''And importantly was intended to continue on a ongoing basis. The large scale of the operation is illustrated by the multiple importations carried out over several months, the quantity of cocaine involved which at the time and according to the Crown still today was the largest recorded.''

The judge was reluctant to reduce the men's sentences to take into account the hardship they would face in a New Zealand prison as foreigners far from home and loved ones.

''It seems, I am not quite sure what the right word is, but almost arrogant to suggest that once they are caught, that they should be entitled to a discount of whatever sentence that would otherwise be imposed, because they don't want to be in prison in New Zealand.''

Justice Powell said he was obliged under the sentencing act to take it into account and reduced the calculation of Serbian, Cavallo's sentence and Coatian, Habulin's by 5 percent but the two Australian's by just 3 percent.

The judge said all four men, by their own admission, came to New Zealand for the sole purpose, by their actions to inflict harm on the state and the community.

Police said the sentences should send a clear message to anyone seeking to prey on New Zealand communities by importing and distributing illicit drugs.

Earlier in submissions to the sentencing judge, lawyers for the men all claimed that they were not big players in the drug syndicate and were only small cogs.

Mary-Anne McCarty for Habulin said he had played a significant role but challenged the Crown's claim it was the lead role.

Ron Mansfield for Scott also said his client did not play a lead role and was recruited more like a contractor.

The lawyer for Cavallo, Maria Pecotic, said he was not a key player and she described him as a ''bit of a panic merchant''.

The fourth man, Northway was described by his lawyer, Bruce Hesketh as a lackey or helping hand.

Justice Powell did not accept feelings of remorse expressed by Cavallo, Scott and Habulin were genuine, but did believe Northway's was.

The Crown had asked for a life sentence for Habulin and Scott, 30 years for Cavallo and 20 years for Northway.