A large grey concrete wall in Hamilton has been transformed by what's thought to be one of the biggest murals in the country. 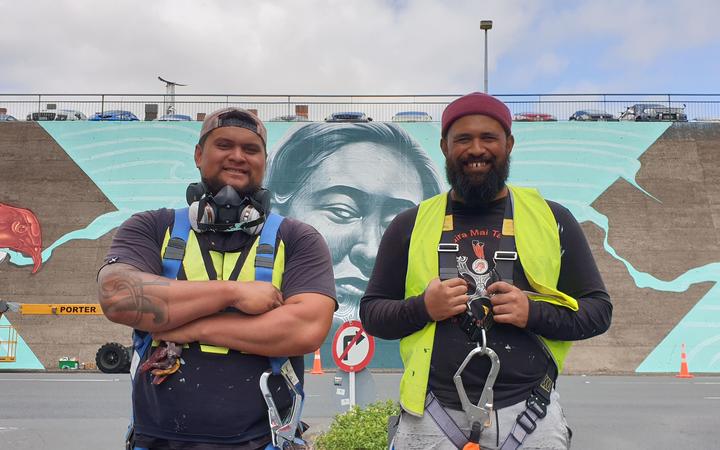 Poihakena Ngāwati and Te Haunui Tuna said the idea was to tell the story of the site. Photo: RNZ / Andrew McRae

The wall is 248 metres long and 11 metres tall at its highest point. It was originally part of a hill, Te Kōpū Mānia o Kirikiriroa, that was excavated as a work scheme during the depression.

Since then it has loomed over passers-by in Anglesea St in the central city.

Two artists have been up on cherry-pickers painting the mural for the last couple of weeks.

The design includes the awa, the Waikato River, tūī, the face of a wāhine representing Mātāriki, and references to the fertility of the area, as it's close to the site of early Māori gardens. 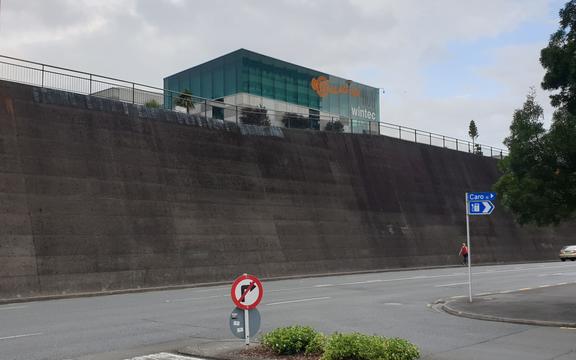 The wall on Anglesea St in Hamilton before the mural. Photo: RNZ / Andrew McRae

Te Haunui Tuna said the idea was to tell the story of the site.

"We have looked at this wall for years and years and Poi grew up here, so as an artist I think we can't say we haven't dreamed of painting this wall, so it's a dream come true."

Poihakena Ngāwati said getting the design from the concept stage to putting it up on 180m of the wall proved tricky.

"What we used was the rails at the top of the wall and we used that like pretty much our ruler and for spacing and rolling up all our lines and once we got the general shape of it, that's when we started painting by colours and filling in."

Tuna said it had been hard and hot work.

"Like this week, in particular, Monday was insane, I think it got up to 30C and there was a light breeze and on a hot day like that a light breeze might as well be no breeze, but probably the thing that takes the beating the most is our feet, just being on our feet all day like hats off to people who stand all day for a job." 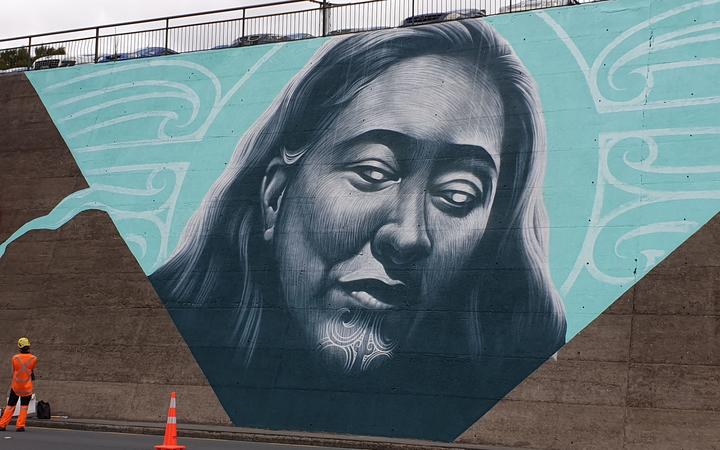 Ngāwati said completing the work was a relief.

"It's not going to sink in until we actually step away from the wall and actually get to look at it properly from a spectators view. I think around then the proud (feeling) will start boosting again but yeah it's more relief than proud."

The idea of a mural on the wall has been around for a long time, but after nothing happened, city councillor Ryan Hamilton took on the challenge and set up the trust to oversee it.

He said watching it come to life over the last few weeks had been amazing. 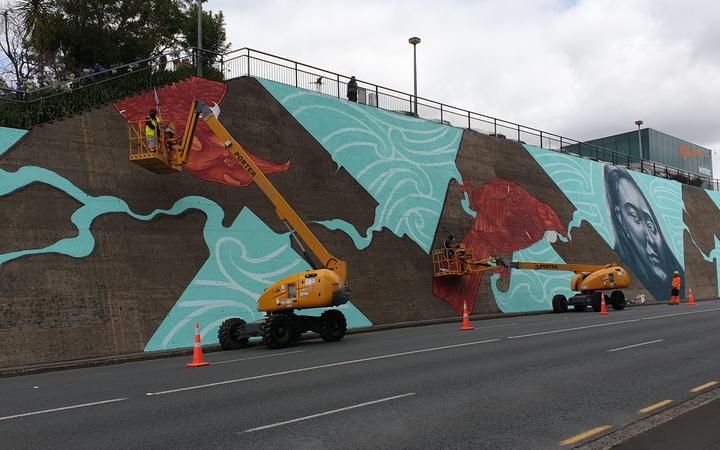 The reaction from members of the public on Anglesea St to the mural was pretty positive.

"I think it is actually brilliant, it's amazing, it's detailed."

"It's absolutely beautiful just seeing something on this wall because it needed a bit of a spruce up and it is bright, it's colourful."

"It's really amazing and creative."

"It lightens up the wall, I guess that is one of the positive things about it at this stage."

The mural will be blessed at a ceremony on 4 February.

Ngāwati estimated that about 200 litres of paint had been used on the mural.