The man who murdered Grace Millane has been ordered to pay his landlord more than $5000 for damages to his apartment and unpaid rent. 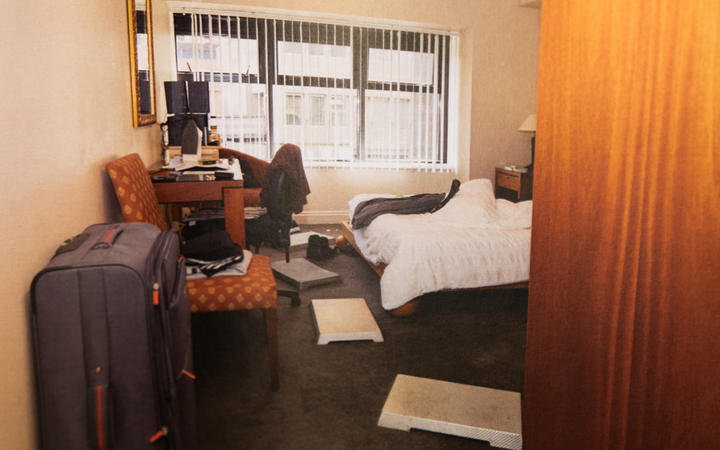 One of the photos shown to the jury of the police scene investigation at CityLife hotel apartment. Photo: RNZ / Supplied

The 27-year-old, who can't be named, strangled the British backpacker to death in his CityLife apartment in Auckland's CBD in December 2018.

However, the landlord doesn't expect to see a cent of the money owed, given his former tenant is in custody awaiting a lengthy jail sentence.

The man's fixed-term tenancy at CityLife ran until October 2019 but was terminated due to "abandonment" on 12 December 2018, the decision read.

The 27-year-old was arrested and charged with murder on 8 December 2018; a day before Millane's body was located in a suitcase in west Auckland's Waitākere Ranges.

The man's landlord, who RNZ has chosen not to name, sought compensation for replacing missing items including two access cards, an iron, a vacuum cleaner and a mattress protector.

He also sought compensation for a queen-sized mattress and an area of carpet that was damaged and required replacing.

The apartment's carpet and underlay were lifted during forensic scene examinations in the investigation into Millane's death.

The mans' landlord told RNZ he first learned the CityLife apartment was the scene of a murder when he noticed police tape on the outside of the room.

He said the police investigation and ensuing criminal case caught him - and apartment staff who spoke to the man in passing - by complete surprise.

"People left flowers outside CityLife afterwards and I ran into staff who told me not to feel bad because they all thought he was very nice and friendly too."

"He wasn't on my radar as a violent person at all."

The landlord said the man had only been renting the apartment for five weeks and purported to have worked at Woolworths since he was a young teenager.

"He said he made over $150,000 a year on his salary but he preferred to rent a modest place and eat out at restaurants." 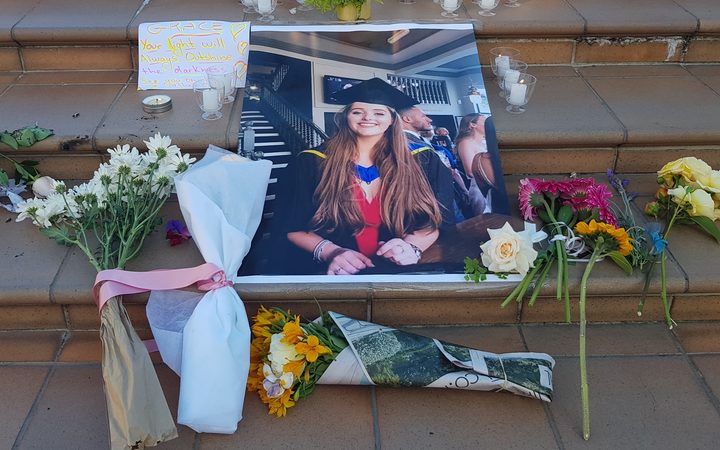 A photo of Grace Millane surrounded by flowers at a vigil in Wellington in December 2018. Photo: RNZ / Emma Hatton

His landlord, who has more than two decades of property experience, said he ran basic background checks on the man which raised no red flags.

"He's a total liar because he can't help himself. I think his personality is very dangerous."

In its decision, the Tenancy Tribunal awarded the landlord compensation for all furnishing replacements totalling $1400 - $687 of which was for replacing the carpet.

It also ordered the man to reimburse his landlord for the costs in re-letting the apartment after breaking the fixed-term tenancy and a tribunal filing fee.

The man's landlord had applied for exemplary damages over "loss of reputation due to the nature of the crime that the tenant has been charged with".

However, the tribunal found this didn't fall under the Residential Tenancies Act 1986 as at March 2019 the murder was an unproven charge and dismissed the claim.

"It is a breach of the Act for a tenant to use or permit premises to be used for an unlawful purpose ... however, the tenant has not yet been convicted of a crime and insufficient evidence was provided to the tribunal to link the premises to any unlawful purpose," the decision read.

The landlord told RNZ he didn't expect to see any of the money or continue pursuing damages over loss of reputation in light of the man's pending jail sentence.

"Unless a family member wants to do the right thing it's probably not going to happen," he said.

Grace Millane met her murderer on a Tinder date on the eve of her 22nd birthday while travelling through New Zealand on a worldwide OE.

An interim name suppression order remains in force, suppressing the man's name and any identifying details, until further order of the court.

He is due to be sentenced by Justice Moore in the High Court at Auckland on 21 February.