A controversial American dog trainer who is receiving death threats says he will still come to New Zealand to run a seminar, despite a petition against his entry to the country. 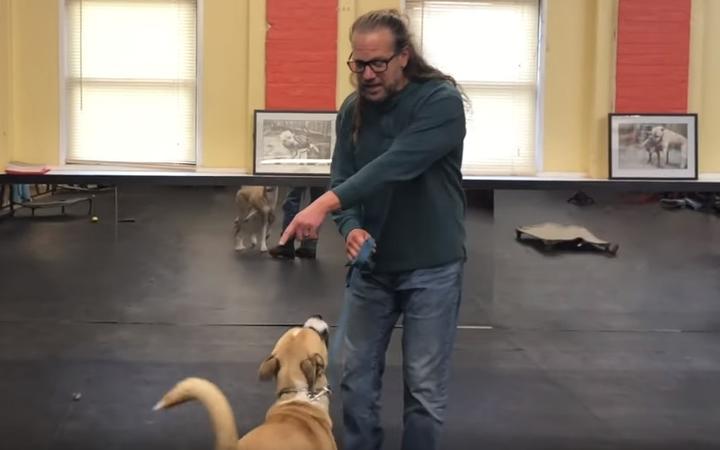 Dog behaviourists and trainers do not want Jeff Gellman from Solid K9 Training to run a seminar in New Zealand because they believed his techniques breach the animal welfare code.

More than 8000 people have signed a petition calling for the Ministry for Primary Industries to ban the Auckland event because they say he uses abusive tools to train the dogs.

Gellman, from Rhode Island, uses shock collars and the banned-in-New Zealand prong collars in his training.

The petition also raises concerns about his trademark tool - 'bonking' - where he smacks a dog over the head with a tightly rolled up towel.

He defended his technique and said he only used such measures on the most difficult of dogs, and the video being shared had been doctored to fit an agenda.

Gellman has been the subject of worldwide criticism ahead of his international tour. He told RNZ he was receiving dozens of death threats a day because of his training style.

Despite the uproar, he was still planning on coming to New Zealand in July.

Petition organiser and dog behaviourist Kelly Mcfarlane said she was against his techniques because they were abusive and outdated.

"We don't want to be condoning harsh punishment methods to be used on our dogs here in New Zealand," she said.

"Certainly the techniques that have been shown currently and throughout the media globally, is not really the best way to be training dogs."

She said there was scientific proof that using harsh punishment to train dogs created more problems, making them fearful and untrusting of people, she said.

McFarlane said she was concerned he would promote the use of shock collars and 'bonking' to the New Zealand audience.

The Ministry for Primary Industries (MPI) said it would not be intervening to prevent the seminar in Auckland despite the concerns raised in the petition.

A spokesperson said MPI took animal welfare seriously, with clear laws and guidelines for how animals should be treated - specifically when dog training and the use of physical punishment tools.

"Recommended best practice is to train dogs calmly and patiently using recognised techniques that provide positive reinforcement for acceptable behaviour as part of the training process. Dominance should not be established by physical punishment or processes that are psychologically harmful to the dog.

"[It] specifically prohibits the use of pinch and prong collars.

"Electronic devices have the potential for misuse and abuse. If used incorrectly, they can significantly reduce the long-term welfare of a dog."

MPI said such devices should only be used when without them, the dog would be euthanised.

SPCA said it did not support using pain or distress to train a dog when more humane options were available and more effective.

"Using electric collars as a method of training rely on an animal experiencing an aversive, negative event which can cause an increase stress, increase the risk of aggression and other problem behaviours, and damage the human-animal bond."

Companion Animals New Zealand general manager David Lloyd said they would prefer Gellman was not coming to New Zealand to share and promote his abusive techniques.

He said dogs treated with those methods usually already had behavioural problems, and punishment and pain techniques could make them worse.

Lloyd said in an attempt to stop trainers like Gellman, Companion Animals New Zealand was setting up an accreditation system where those who used fear-free and ethical training methods were recognised.

"How do you know you're hiring someone that is going to treat your animal ethically? And what does that actually look like? And so provide some confidence for the consumer or the pet owner as it were."

Gellman's social media sites have been deleted and tickets to his seminar in July are no longer able to be purchased.