A man whose dog was locked up in the Whakatāne pound over Christmas is questioning why staff didn't scan its microchip and why, when he rang, they told him the dog wasn't there. 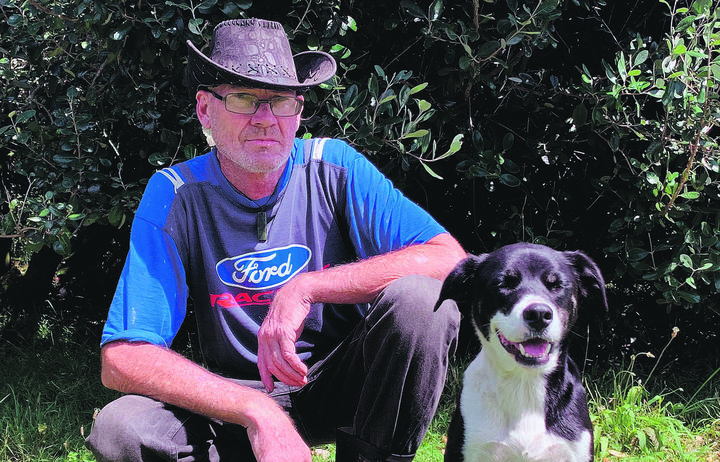 Tyrone Brown is pleased to have his best mate Isaac back at home after he spent several days in the pound. Photo: Charlotte Jones / LDR

Tyrone Brown's dog, Isaac, was picked up by animal control from a neighbour's home after they found it wandering on Christmas Day.

Brown, who lives rurally, rang the pound the following day and gave staff a detailed physical description of the dog, including his distinctive curled tail and his registration number, only to be told he wasn't there.

He then searched for Isaac for two days before putting a post on a Facebook lost and found page. This was seen by the neighbour who got in touch the next day and told Brown they had given Isaac to the pound.

"My dog is microchipped and registered so I would have expected them to use their scanner to read their chip and call me," Brown said.

"When I found out he was at the pound I shot down there straightaway. I whistled out and sure enough, I could hear my dog crying inside there.

"The most heartbreaking thing was walking up and down the road, checking all the drains for a dead dog. I really thought he was gone."

Isaac was collected by Brown four days after being locked up - three days longer than he should have been there.

Brown believes staff did not follow the correct procedure when taking dogs back to the pound over the festive season. He has a photo on his phone of a log at the pound that shows no dogs were accepted into the pound on Christmas Day, despite this being the day Isaac arrived.

The day after collecting Isaac, Brown went into the council to complain about the process and was told an incorrect procedure had been followed.

Brown said he had originally been charged $160 for Issac's release but was refunded $82.50 after he complained.

He is unsure how the council arrived at the figure as the receipt, which is filled out by hand and has been viewed by this LDR reporter, is not itemised.

"They expected me to pay $160 upfront to get my dog out of there, which I couldn't afford," Brown said.

"I just walked him out of there and told them I would arrange a payment plan, which apparently they don't allow. Why can't they allow people to pay it off?"

Whakatāne District Council acting chief executive Julie Gardyne said in this instance the after-hours contractor did not comply with procedure. She said the contractor had been advised of the situation and was fully aware of the procedure required.

However, there was some disagreement on exactly what Brown was charged for Isaac's stay in the pound.

Gardyne said the initial fee charged only applied during the council office closure period over Christmas and New Year.

"During this period, a flat-rate fee of $150 for registered dog owners covers the impoundment fee, the after-hours callout fee and sustenance fee," she said.

When normal office hours resume, the exact fee is calculated, and the dog owner credited if the balance is less than the rate charged. An itemised statement is provided to the customer at this point.

"In this instance, due to the initial error, council waived the after-hours callout fee and additional sustenance fees. Mr Brown was charged a $60 first-instance impoundment fee and an additional $7.50 sustenance fee for one day, a total of $67.50."

When asked why the council did not allow people to pay off their pound fees, Gardyne said the costs associated with dog ownership were a responsibility the owner must be prepared to meet when they made a commitment to own a dog.

After an owner had receives written notice from the pound that their dog has been impounded, they then have seven days to collect the dog and pay any fees owing otherwise the council might sell the dog or euthanise it.

On average the council impounded about 700 dogs every year. Of these, around half were euthanised.

"That could have been my dog," said Brown.

"I did everything right, yet they tried to steal my dog."

Despite his ordeal, Brown said Isaac was now "happy to be out of jail" and back at home.