The man accused of the Christchurch mosque shootings will be one of the first to see draft sections of the report compiled by the royal commission investigating the attacks.

As well as reading parts of the draft report, Brenton Tarrant will also have the opportunity to respond before the final copy is handed to the Governor-General at the end of April.

The commission says it's a legal obligation, but a Muslim community leader fears it gives the accused too much power.

Late last year, the government announced it was giving the Royal Commission into the Christchurch mosque shootings more time to complete its investigation. It followed a meeting in August between the two commissioners and the minister responsible for the high-level inquiry, Tracey Martin.

Documents obtained by RNZ show at that meeting, the commissioners asked for an extension so relevant agencies, as well as the accused gunman and his lawyers, could look over the draft report. 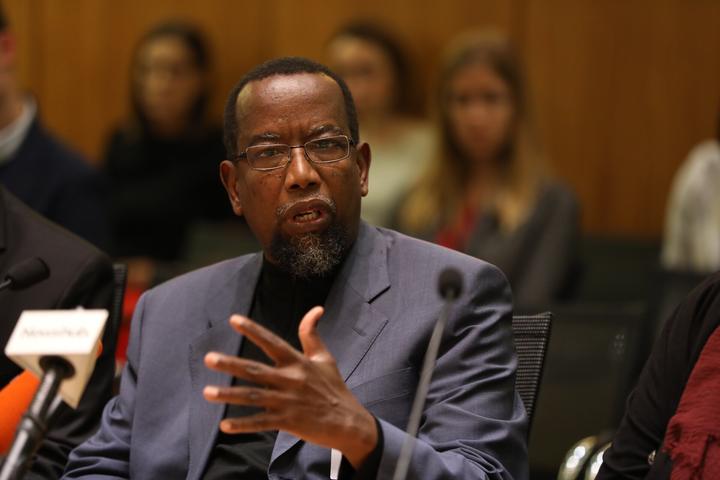 Mustafa Farouk is questioning why the man accused of the Christchurch mosque shootings should be the first to see sections of the report investigating the attacks. Photo: RNZ / ANA TOVEY

Mustafa Farouk, the president of the Federation of Islamic Associations, questions why Brenton Tarrant should see it before the public.

The inquiry is investigating what could or should have been done to prevent the attacks, as well as examining the role of New Zealand's security agencies. It is also looking at the accused gunman and his activities before 15 March.

Criminal Barrister Jonathan Eaton QC said by law, the commission must inform the accused of the sections of its report that directly relate to him.

"What the obligation of the Royal Commission is is to ensure with whatever process they deem to be appropriate for the circumstances, to make sure he has the opportunity to comment on any findings that are adverse to him. So the extent to which there are findings adverse to any state agencies, I wouldn't have thought that any of that material will be going to him. It'll be very focussed."

University of Waikato law professor Al Gillespie said the inquiry would fail to do its job if it did not speak to the Australian national.

"It's about how he came here, it's about what he was doing here ... it's about his use of social media and it's about the communities he interacted with.

"To answer that second part of the terms of reference you must talk to that man."

Prof Gillespie expects the accused's involvement with the commission will be carefully handled.

"The evidence will be gathered and it will be carefully edited to make sure it is only relevant to the questions that are being asked, that they will not give him a platform.

"It's got to be factual and those facts have got to relate directly to the state agencies with whether they should have done something more, what they could've known and any gaps that they may have found along the way."

In a statement, the commission said no-one, including the accused, should expect to see a full draft of the report, or even extracts from it.

By law, it must notify anyone who is adversely affected by the report findings and allow them to give feedback, it said.

"The natural justice process is designed to put a person on notice that an inquiry has formed adverse views on that person, or is likely to include adverse findings. It gives that person an opportunity to respond. It is not a veto on what the Royal Commission can say (or recommend) in its report.

"To the extent that the Royal Commission's report may contain adverse findings about the accused, we will follow the process required by the Inquiries Act."

The spokesperson said only persons or organisations with appropriate government approved security clearances will be provided with any information that may be classified.

They said it has received requests from the Muslim community to see the report in draft, but due to its sensitive nature, it is unlikely those requests will be accommodated.