In-house dietitians are being touted as a possible solution to under-eating and malnutrition among rest home residents. 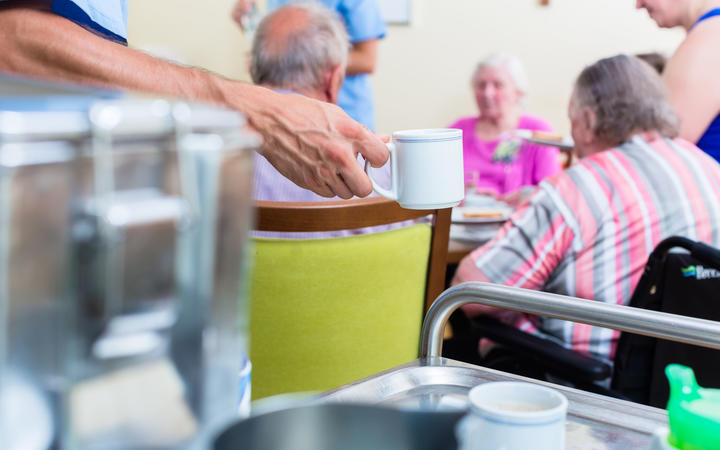 It comes after a new study by Otago University researchers, who tracked 50 residents' diets at a Christchurch aged care facility and found 72 percent didn't eat enough protein to maintain their body muscle.

In a complaint in 2017, Di Barritt said her 92-year-old mother would struggle to chow down the food at a retirement village in Christchurch, with only one tooth left in her mouth.

She tells RNZ the meals were "beautifully cooked", but the huge portions and chewy contents weren't right for the elderly, and each night half the food served up to residents would be wastefully scraped into the bin.

"But to see a huge dinner plate come to you and you can't even eat a sandwich."

The retirement village told RNZ it offered fortified and texture modified food for residents with eating difficulties, approved by its dietitian.

"This is a project we have been working on for some time and we work with a specialist NZ fortified food company to do it," a spokesperson said.

RNZ has spoken to several other people with concerns about chewy food and oversized portions at rest homes around the country.

It wasn't so much the food but the strictly limited mealtimes and lack of help that caused frustration for Zelda Keen, whose mother-in-law was a rest home resident.

"There was another lady there who could barely see herself. She'd would get a spoon to her mouth and half of it would fall off. She'd try that about twice and then give up. My mother-in-law and I would actually feed her, otherwise she would have starved," she said.

Neither Barritt nor the Keens were surprised to see serious problems laid bare by the University of Otago study, which isn't the first study of its kind.

Four years ago, two different University of Otago researchers found a high risk of malnutrition for Dunedin and Mid-Canterbury rest home residents as well as inadequate intakes of energy, protein and fibre.

In 2017, senior lecturer Sue MacDonell studied the diets of more than 300 people across 16 rest homes, and found a risk of malnutrition, although caused in part by physiological changes.

She said her study, and the most recent study, indicated the need for changes in the kitchen.

"What we need to do in terms of food provision and meal provision now is actually look at boosting what we're giving. So the types of meals are great but we're going to need to look at how we're going to fortify those meals, for instance adding extra protein-based food to meals that people are already eating," she said.

Barritt said rest homes, like her mother's, should have a full-time dietitian on hand to ensure residents get the meals and nutrition they need.

"The need to actually identify people at the early stage of malnutrition before it actually sets in, where someone is identified as 'at risk', is where interventions need to happen. That doesn't necessarily need to be by a dietitian, but dietitians are well placed to develop the strategies and interventions that rest homes can give," she said.

The Christchurch rest home in the study told the lead researcher it has taken the findings onboard.

Age Concern Canterbury chief executive Simon Templeton hoped the study would be a wake-up call for rest homes, but also other aged care facilities and hospitals.

"I think all those areas need to have a close look at what food they're offering and how often," he said.