The "heart" of a small Northland community and generations of memories have been lost in a fire overnight. 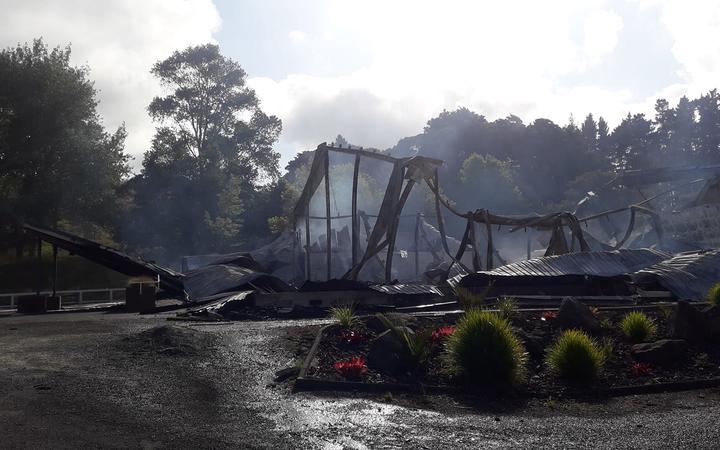 The Upper Wairoa Memorial Complex in Tangiteroria went up in flames about 3am. Photo: Supplied/David Wills

The Upper Wairoa Memorial Complex in Tangiteroria went up in flames about 3am, with questions lingering over whether it was lit intentionally.

"It's completely destroyed the hall. Only the steel girders are left; the rest was burnt to the ground," Mr Wills said.

He visited this morning and said locals were standing around reminiscing, along with the Dargaville volunteer fire brigade who'd been there all night.

"At the moment the fire inspectors are on site; they can't form a conclusion yet obviously, but there are questions marks regarding whether it's possible it's an arson."

Mr Wills said after the tavern and other social spots closed, the hall had become a local hub.

"The complex is the heart of the Tangiteroria community. The hall was used for regular fortnightly dinners where the community came together, it was also the base for sports activities."

It had basketball courts, and with a kitchen and showers it acted as a clubrooms for the local rugby club.

He said locals also had wedding receptions there.

"So it's not just a building, but it's a significant part of the community," he said.

"The building was roughly 30-odd years old, but more importantly than the building itself were the memories in it; there were numerous photographs of past residents, there were plaques to World War I and II losses."

Mr Wills said the building was fundraised and built by the community too, so had an even larger stake in its existence.

"Mostly [the locals] are talking about the memories. A lot of the local families are second and third generation, if not fourth, so it's the memories associated with that place - the family and community gatherings. There's a very strong pride of being part of Tangiteroria, and that was very much the focus of the community."

Mr Wills said there had been other suspicious fires further north, so arson may be considered.

"All I can say is that there's been other activities adjacent to Tangiteroria which are of concern."

Fire and Emergency confirmed it sent three fire trucks and two tankers. A spokesperson said the building was well ablaze when they arrived, and a fire investigator is on site.