Nobody knows Thomas the tabby cat's tale, but after six years on the run, he has been reunited with his family. 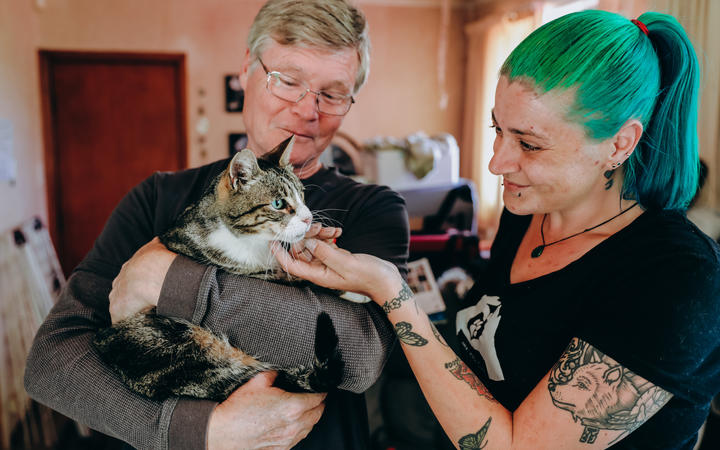 A disappearing act took him on a journey through Wellington, but he refused to answer RNZ's questions when asked where he had been hiding out.

What happened is a mystery, but through the magic of micro-chipping, the cold case of Thomas' whereabouts has been closed.

Thomas was adopted from the Wellington SPCA nine years ago, spending three years with his family before he was spooked on a Guy Fawkes evening.

His owner, Alan Aaltonen, had tears in his eyes as he spoke about being reunited with Thomas after agonising years wondering what had happened to him.

"The hardest part over the years was the closure thing, what had happened to him, we never saw him, he just disappeared...

"We never thought we'd ever see this one again. It's a real thrill to see him and to see him in good health too, he's been looked after by somebody."

Aaltonen said the family had long lost hope of finding Thomas when a phone call from Loose Leash Cat Rescue took them by surprise.

The charity's organiser, Emjay Dette, was called to the scene after he was found rummaging through rubbish and stalking around the neighbourhood.

After cornering the runaway she found the family's details through scanning the stray tabby's micro-chip.

"I started going through the processes and ringing - first number disconnected - second number, disconnected - third number 'ring ring, ring ring,' with a very hesitant hello Fonda speaking' on the end of the phone.

"I said 'Hi my name is Emjay from Loose Leash Cat Rescue. I'm ringing in regards to a tabby and white cat that has been found'.

"Fonda kind of sounded a bit confused and went 'uh okay'. I said 'Are you missing a tabby and white cat?'."

She was just as surprised as the family to find Thomas had been missing for six years, she said.

Fonda Aaltonen then phoned her husband and asked him if he'd believe her if she said the cat had been found.

"I didn't really believe it till we came around here and saw him. It was kind of like 'how does that happen? How does that work'," Aaltonen said.

Thomas even remembered his old family after a few pats and cuddles.

Dette watched on as the family were reunited with him.

"But the tears of joy that came after that and the just the best feeling of happiness ever came through after that," she said. 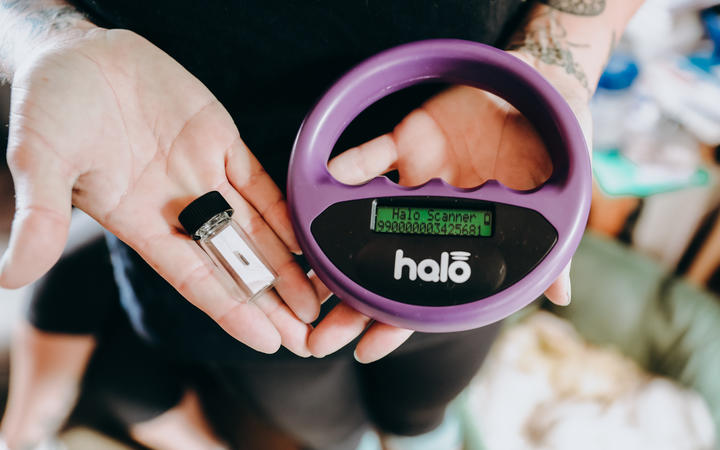 Thanks to the magic of micro-chipping, Thomas was found. Photo: RNZ / Charlotte Cook

It was not the first reunion for Dette.

She has reunited two other cats with their families after two-year stints as vagrants.

They showed why it was so important for owners to micro-chip their pets and keep their details in the register up to date.

Despite the happy reunion, the Aaltonens live in a motorhome and couldn't take 11-year-old Thomas on the road with them.

But the rollercoaster of emotions didn't stop there.

The couple's son was 13 at the time of the Thomas' disappearance. Now 19, he's on the hunt for a pet friendly flat so the family can stay reunited.

However, Dette said Thomas needed some rehab and vet checks before he would be off with anyone.

The cat was going through more than two litres of water a day - a sign of kidney problems - so the charity, Loose Lease Cat Rescue were fundraising to cover his vet bills, she said.

A Givealittle had been started - asking people to have a "Morning Tea with Thomas" by donating the cost of their coffee to his bills.

Dette was also chasing a lead on the mystery caretaker, who might be able to fill in the gaps on the prowling puss.

While it might not be clear how many of his nine lives Thomas has used, the tabby's tale appears to be getting a purrfect ending.